I have only ever left the country once in my life and that was just this past summer. I went to the Philippines for 2 months and loved Southeast Asia so much that I just had to go back. Now, I find myself in Thailand. The decision to study abroad was rather spontaneous, actually. I am a junior at UA and far enough ahead in my major/minor requirements that I could graduate early. BUT, having scholarship for 8 semester led me to look into alternative options. Why not let the school pay for me to broaden my horizons, experience new cultures, and eat delicious food? I knew people studied in Europe to speak languages they are learning, but I decided I wanted to go someplace more exotic, with rich culture and a different religious predominance. That is how I ended up here in Bangkok, Thailand.

I arrived on September 6th with a large suitcase and a carry-on containing the bulk of what I thought I would need for this semester. My biggest regret: leaving behind sunscreen and bug spray. Here, you can only buy bug spray at a pharmacy and it is ridiculously expensive, and all sunscreen has whitening in it because Thai people want to have lighter skin (opposite of Americans). This was only the beginning of the culture shock I experienced….

I knew that in Thailand a different language would be spoken, but was not prepared for the extent to which Thai people would not understand English. I thought, being 40 minutes from the heart of Bangkok, that everyone would be able to communicate with me at least in broken English, but that has not been the case. Most people, especially in the area around my apartment complex, do not speak a lick of English! This has made life hard in a variety of ways. First, the culture here is very centered around food, and there are food ventures and little side-of-the-street restaurants EVERYWHERE! A meal is only around $1-2, but the problem is that many of the menus are in Thai and have no pictures. The first full day there, a group of Americans from my study abroad program and myself had to order food by pointing at a dish that another customer in the restaurant was eating and hoping that it was not too spicy. Good food is something that Thailand is known for, so it was really hard to not know what we were eating. Since then, we have improved our vocabulary to include a few essential food words.

Another aspect of this culture that has been interesting and overwhelming to me is the market lifestyle. There are not many Walmart- or grocery store-like places because everything is much cheaper at the little stands on the side of the road or in markets. This weekend a few from my group made our way out to a popular weekend market in the heart of Bangkok. This one market was 120 acres filled with 9,000+ stalls. I spend the entire day there and probably did not even see half of all the little shops. Also, the prices here are incredibly cheap to begin with, but also you are able to bargain and occasionally get items for 1/3 of the original price they were asking. It was incredible and also overwhelming as looking around shops always includes a salesperson hovering over you telling you that the price of their items is “cheap cheap”.

Lastly, as I am studying at the international portion of a university here in Thailand, one thing that has been extremely fun and exciting has been meeting people from all over the world. Yesterday, I spent time with 2 people from Hong Kong, 4 from Malaysia, 2 from Japan, 1 from Indonesia, and 2 from Korea. Learning about culture and traditions from these different countries is so interesting and has definitely opened my eyes and helped me have a larger and more accurate perspective of the world. I venture to say that sometimes the most enrichment and best learning is experienced outside the classroom. But then again, I have yet to take classes in this new context yet, so I will find out tomorrow! 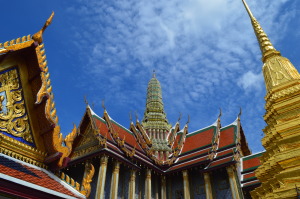 In the time before classes start, we have visited many tourist destinations, including multiple Buddhist temples like this one called Wat Phra Kaew (Temple of the Emerald Buddha) 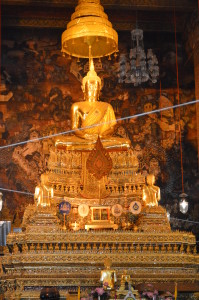 This is a view of a sitting Buddha from inside the temple. All visitors must take their shoes to enter this temple.