Exploring Amman One Step at a Time

When some people go abroad they seek out “cultural activities” like learning how to cook the local cuisine or playing a traditional instrument. While I did spend time painstakingly tracing Arabic calligraphy and cooking knafeh (a delicious Jordanian dessert), one of my favorite Jordanian activities was fastwalking. Early in the semester, my friends and I heard about a fastwalking group in Amman and thought, why not? Back home, I love running but when I came to Amman I quickly realized that was an activity I’d have to forgo, at least for the semester. During orientation, our program director jokingly told us that if you see a Jordanian running on the street, you should start running too because something bad is probably chasing them. Turns out there was some truth in this because the one time I saw a Jordanian running it was to reach a bus that had just flipped over in an intersection.

So, with running out of the question, I figured fastwalking would be the next best option. The first week, we donned our mandatory, construction-yellow vests with skepticism and set out for the meeting place at 5th circle. As we stood by the circle, we were surprised as more and more people in matching fluorescent vests got off buses, out of taxis, and emerged from all directions until there were at least 100 walkers. The atmosphere was friendly- before the walk had even started, we’d met a French student who’d also just moved to Amman and been offered candy by one of the organizers. 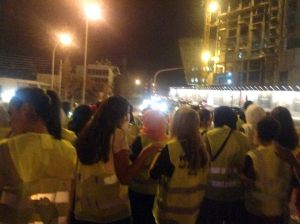 Fastwalkers assembling before the walk

Now, fastwalk is one of the highlights of my week because I get to chat with friends, see new parts of Amman, and get some exercise in. Even though I still occasionally wish I could go for a run, fastwalking has been an equally fun and unique activity. 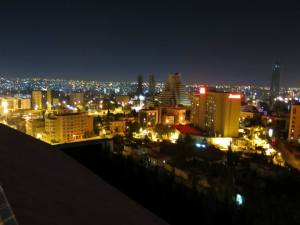 While it’s common for study abroad students to miss activities from home, that’s not to say there aren’t alternatives in every country – learning to adapt is part of the process. Adaption, though, is a double-edged sword because I know I’ll miss fastwalking when I leave Jordan in 2 weeks!