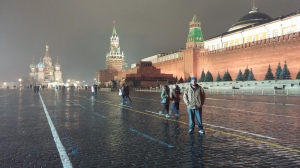 Whether it comes on all at once or in a steady progression, you soak in the culture of your host country.

You don’t have to eagerly dive in head first to find yourself picking up the mannerisms and habits of everyone else around you- it’s inevitable and crucial to gaining the perspective that studying abroad promises.

A few months into my trip I found that I was no longer adopting a handful of cherry-picked idiosyncrasies, but was fully encompassed by an entirely new and foreign daily routine. While a conversation of any substantial length would surely reveal my status as a foreigner, in most other realms I had taken on the form of an everyday Russian.

Some of the most obvious adaptations could be attributed to living in a frigid city of over 5 million people, as opposed to small city in the south of the United States. Morning departures are drawn out and brace you for a long and cold journey into the city with the necessary tea, conversation and a back-and-forth game determining just how many layers today’s weather necessitates. A maze of buses, trams and metros have their own rhythms and rule-sets that allows the city to quietly flow, while on the street a shared national disposition and countenance. Meals and visits are segmented by toasts, gift-giving and further niceties while and afternoon with friends is bound to involve more walking than couch-sitting.

It’s no surprise that you’d begin to emulate those around you and find yourself a daily routine that you could find comfortable in your new environment, but what took me off-guard was just how stark the contrast of an average day this November was to any day last summer living in Alabama. After a trip to Moscow we were afforded a break from classes that I took as an opportunity to decompress.

Despite devoting some time to Petersburg’s parks and museums, I quickly slipped into old habits in the confines of my room. A few days into catching up on hometown hockey, falling into Netflix and connecting with American friends, I felt subconsciously as if I’d returned home.

The following Monday and return to Russian life was a slight shock to my system. Everything remained pleasant and comfortable, but I was somehow more aware of just how unfamiliar everything around me was. Yet, I was not repulsed by this notion, but excited by how unique an experience abroad is.

I now wonder what reaction I’ll have to being fully immersed once again in American life. My realization of how foreign Russian life can be next to American life runs both ways, and I look forward to reflecting on the whole of my experience from home.