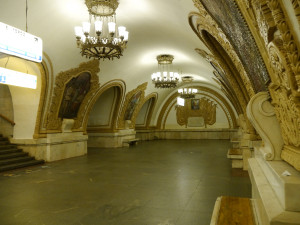 The Moscow Metrow. Photo by Yuki.

After coming back to America, I wish that I had more opportunities to share my experiences. Rather than hold them in though, I’ll just share one with you. It was one of my first days in Moscow, and I was hungry (not just for food but for a taste of life in Moscow). Being adventurous, I headed down to the nearest продукты with nothing but a few hundred rubles and my extremely limited knowledge of Russian language. One food I stumbled on was innocently labeled сметана and had a cute blue cat adorning the plastic tin. Without any reasoning, I assumed this was yogurt. I bought it and made my way back to my dorm to eat it. It didn’t taste like yogurt, but I was open-minded. Maybe yogurt tastes different in Russia. After struggling through at least 10oz of this “yogurt”, I put it up in the fridge. Later that day when I asked a friend about my сметана, I learned that I had just eaten almost a whole jar of sour cream.

Time seems to move twice as fast in Moscow. I’ve been in America for a week now, and looking back on my time abroad, people I’ve met feel as familiar to me as old friends. I’ve learned more than I imagined possible in my courses, and I can look back on an uncountable number of experiences abroad that I deeply value. I recommend studying abroad, and more specifically, I recommend attempting to learn some of the native language. In my small program I think that the people who tried to learn Russian became much more connected to the city and the people we met seemed to appreciate our attempt at speaking their language. I am grateful for everyone who has been a part of my time abroad.
Thanks,
Chris