I’ve been in Europe for just one week now and I still seem to think I am on vacation instead of actually getting to live here for four months! My first stop was England where I wanted to speak to every person just to hear their amazing accents! Then I moved on to Paris where I ate enough crepes for a lifetime and now my new home in Florence or “Firenze,” Italy! Every single place have shown me so much history that the United States doesn’t have as a younger country, with each adding something different and exciting to my European experience. Firenze is beautiful and I have fallen in love with the doors leading to my apartment and I also have a weird fascination towards buzzing people upstairs.

Within the first few days of traveling in Europe I began noticing numerous differences between Europe and the States. Most of the first things I noticed were what people had told me such as having to pay for water or “still water” as they call it at restaurants (which I am currently convinced Europeans do not drink!), everything from towels to elevators are so much smaller here, and some people speak better English then most people I know! I also noticed that some stereotypes are also true like the fact that almost every one of all age’s smokes quite often, there really are gypsies, and they drive like maniacs, there was actually no lines on the road in Paris!

Last year I remover writing in my journal that I couldn’t wait to finish school and start traveling the world. It is amazing to think that I have gotten to combine the two things and continue school while meeting and understanding an entirely new culture and lifestyle. I have had an amazing time seeing the sights that I dreamed about, but I have found that I already miss the little things from the United States. I even went to the Hard Rock Café already for chicken fingers! I know the differences will soon be nothing to me but breaking from a normal routine and getting adjusted is hard but in the end all worth it as adventure is a key component for any life! The Italians have an amazing culture that I hope to be a part of quickly by joining in fresh markets and cooking a traditional meal.  I feel like Professor Dumbledore from Harry Potter said it best when he said, “Differences of habit and language are nothing at all if our aims are identical and our hearts are open.” 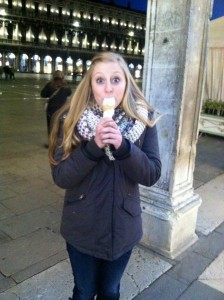