For Those Needing a Good Laugh (A Parisian Drama)

They say studying abroad is a “life changing” experience. What an overused cliché right? Wrong. It really is. Less than a month after arriving to Europe, I was slapped in the face with a reality check of comical proportions. But before I get to the juicy details, a bit of background and summary of my first month.

I departed from the U.S. on Jan. 14th; however, my program did not start until Jan. 20th in Spain so I made a quick pit stop in London to see my girlfriend (who is studying in the UK) for a few days! She goes to another SEC school and we happened to be studying abroad at the same time so this marked the first of our planned adventures together. After a great visit I had to say goodbye, fly to Spain, and start my own program and studies. My program included 3 days of orientation in Madrid before we headed to Granada. Once in Granada, I settled into my Spanish life very quickly. I had about a week of just being in the city of Granada before my classes started. I really wanted to spend time here (my new “home”) before deciding to venture through the rest of Europe. Classes eventually began and within two weeks I had fallen in love with my new, carefree, Spanish life. Sure I had classes, but every day I had someone–my host mom– to cook for me, do my laundry, clean my room, and even MAKE MY BED! I have tried and tried again to do more around the house, but Spanish host moms strongly maintain that this is their job. Naturally, I felt very content; however, I was not growing. I was not being challenged and felt like I did not have to work for anything.  I was in a fairytale land of complacency and nothing, or so I thought, could bring me back to reality.

Flash forward: Friday, February 13th. I am on a plane to Paris, France. I am meeting my girlfriend there for Valentine’s Day! How cute, right? VALENTINE’S DAY IN PARIS! We had an apartment in central Paris within a 5 minute walk from the Eifel Tower. She arrived in the morning on Friday but my flight got in late around 11pm. It was a little after midnight (so Valentine’s Day) when I finally made it to the apartment. I knocked on the door and was happy to see my girlfriend, and promptly wished her a happy Valentine’s Day! Five minutes after arriving, I was single. Yes, you are reading correctly. I had just been dumped, IN PARIS, ON VALENTINE’S DAY! Given that we had dated for 2.5 years and were in arguably the most romantic setting one could imagine, I was shocked. I could not fathom what was happening, but one thing was for sure, my complacency was coming to an end!

A few weeks and a lot of healing later, I have realized that this was something that needed to happen to me. I loved my girlfriend and it sucks that this happened, but the “perfect” weekend that never was sparked self-growth like I had never imagined was possible. When I returned from Paris, I was no longer masked by a false sense of having the world figured out. For the first time since I departed from the States, I did not have the answers for everything. Being devastated forces you to explore yourself and demands that you find what truly makes you happy. In my attempt to discern what was going on in my life, I began to speak to all different kinds of people to get their perspectives. To my surprise,  I quickly became really good friends with some people of my programs with whom I had not previously spoken. They offered new insight and continue to help me grow each and every day.

My first two months have been a roller coaster but I am so grateful for this opportunity. I do not know the person I will be when I get back, but I know I will be better for all that has happened. Studying abroad is truly life changing. If you are studying abroad or planning to study abroad, do not wait for a slap in the face before you recognize all the opportunities for growth around you . Come into this experience with your guard down and avoid falling into complacency. You cannot grow as a person if you think you already have everything figured out. Being removed from the fast-paced life at home and away from normalcy allows you to do a lot of self-reflection and experience growth. Studying abroad is truly life changing and I would not trade my first two months here for anything. 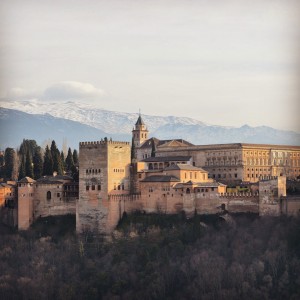