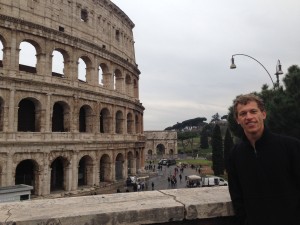 I’ve had another wonderful week in Rome, but I cannot believe how fast the time is flying by! Here in Rome, around every corner there is a building or fountain that makes you stop in your tracks (especially since I live about one tenth of a mile from the Sistine Chapel and St. Peter’s). With that said, I am definitely not a city boy; the traffic, public transportation, hustle, bustle, and chaos (the favorite for Romans), all get a little annoying at times. With that said, there are so many advantages being in a city with so much to see. Additionally, being in a big city means it is cheaper and easier to get to other areas in Europe on weekends.
I have enjoyed cooking a little bit, and have made some decent meals surprisingly. However, my appreciation for the women in my family has grown exponentially (not like I didn’t appreciate everyone before 🙂 ). Also, surprisingly few people in Rome speak English. I haven’t had any major problems yet, but I did buy fabric softener instead of detergent… and tomato paste instead of tomato sauce.
Last weekend was our first true weekend that we were totally free to do our own thing. So, two of my roommates and I bought a tour to the Coliseum, which is the only way someone can see the bottom level and the top level. Because of the events in Paris, security was extremely long (and inefficient I might add). With that said, my roommates and I got in just in time, and ended up on a 5 person tour instead of the 30 person tour it was supposed to be! The Coliseum was amazing and ranks in my top two things so far (along with La Alhambra in Granada, Spain). The bottom level was surreal and the history behind it all just blows your mind. For example, the stadium seated 50 to 60 thousand people, and it was built in 72 AD… let that sink in for a second.
The next day, I attended church at Santa Maria di Popolo (Roman Catholic Mass). I’ve attended a different church every Sunday, and I have loved seeing the beauty of the numerous Roman basilicas. Later that day, we went back to the Coliseum area of town and toured the neighboring two sites (the Roman Forum and the Palatine (both of which are included in the ticket price for the Coliseum)). Basically, the area contained the ruins of the palaces, shops, apartments, and restaurants of the first and second centuries. I really enjoyed seeing those two areas, but the Coliseum is the better known site for a reason. After being mind blown by the Coliseum, it is hard to appreciate the other two areas quite as much.
This past weekend was my last full weekend in Rome… I will be traveling for every weekend for the rest of the semester now! How awesome is that?! Last night a few of my roommates and I booked a 10 day Greece Island Hopping trip for spring break. We will be taking a cruise ship on April 3rd from Italy to Corfu. Three days later, we move onto Athens with a tour guide. Finally, we will travel to Santorini (the island with all of the white coastal homes with blue roofs). Check out Google images of those three locations if you want to see more specifically where I’ll be traveling. There will be about 200 study abroad students on the trip from different universities throughout Italy.
All for now, but I should have a lot of stories to write about soon! Off to Pisa and Cinque Terre this weekend to stay with people from Tuscaloosa- Roll Tide!