Amalfi Coast weekend…ending with a bang

Well, after a wonderful semester, I just completed my last weekend of the academic semester…weird! So, it is finals week…ugh. But let’s forget about that quickly and recap my weekend in the Amalfi Coast area…

Thursday night I left with a group of 150 other college students for Sorrento. We stayed at a decent hostel in Sorrento for the weekend. The next morning, we got up super early (for a college kid), and walked down to the Sorrento port. From there we boarded a ferry (short ride thankfully) across to the GORGEOUS island of Capri.

Upon arrival in Capri, we immediately boarded smaller boats of about 10 to 15 people each. I planned on going with two guys from my program here in Rome, but one’s dad came for the weekend and one got very ill, so both cancelled, which meant I got to make new friends for the weekend. I met two guys from study abroad programs in Florence and hung out with them for most of the weekend. Really neat guys who are from Minnesota. (Most people on the trip seemed to be from Illinois, Iowa, Minnesota, or New York (the New Yorkers had the strongest accents that I have ever heard…straight from movies it seemed like))

Okay back on track… So we got on the boats and started our boat tour of Capri. We went all the way around the island (which took like 90 mins maybe?). Along the way, we stopped in the white grotto, red grotto (red because of the red coral all in it), green grotto (illuminates green inside for some reason), and finally the blue grotto (which illuminates blue because of the light and clear water). The blue grotto is one of the 7 Natural World Wonders right now, so I got in a canoe with a guide, crunched down so that we would fit in the cave opening, and then entered the grotto (amazing!!). I even got to swim in the blue grotto, which was unforgettable! The water was freezing, but soooo clear and well worth the money and chill. I got to swim around inside the cave for about 5 minutes while the guide sang to my small group.

The boat tour was really incredible because we got to see the entire coast of Capri, all the grottos, caves, rock formations, mountains, etc. Unbelievable natural beauty! We also went up to and under Faraglioni (the place where the Dolce and Gabbana commercial was shot). In addition, supposedly seeing a goat is really good luck, because they are very rare to find, but they wander the island. The guide hadn’t seen any in years, but we spotted one which was cool.

After finishing up with the boat tour, we took a quick tram ride up to the first town and got granitas (famous Capri drink, which is essentially a really really really good strawberry lemon slushie). Next, we hiked up to Anacapri and ate lunch. I had a Caprese salad, fried calamari (best I’ve ever had), spaghetti with shrimp and a lemon creme sauce, and a pizza. After feasting, we did a limoncello tasting and visited a salad making shop (traditional Capri thing I guess). Then, we took the single person chair lift up to the lookout point at the top spot of the island. It is about a 15 minute chair lift ride up and well worth it!

The views at the top were unreal… like wow, seriously. I jumped a fence at the top and hiked around some more along the cliff edge with my buddies and saw some even better views.

We took the chair lift back down, which had even better views that direction, and then hiked back down to the port. We took the ferry back to Sorrento and got dinner there at a restaurant that they made feel like a jungle inside with how they did the indoor gardens. Great day!

The next morning we took a bus to Positano. Positano kind of reminded me of Cinque Terre in a way. We hiked down the mountain to the black sand beach and hung out on the beach for the day. I walked on the beach, admired the sights, got some sun, and then decided to rent a stand up paddleboard. I took it out on the Mediterranean, and looking back on the coast from out on the water was unreal! Extremely beautiful! I paddled along the coast, entering the numerous caves along the way. My favorite was on a point with a caslte over the top. I got on my knees on the board to enter the cave, and then it opened up and was like a secret lair with a staircase that led up into the castle. I continued along the coast for about an hour without seeing anyone else. I found numerous little beaches that seemed like no one had ever seen they were so deserted. Paddleboarding on the Mediterranean and on the Amalfi Coast was a spectacular experience and really unforgettable. While paddling back I just kept thinking how lucky I was and how blessed I am for this incredible semester and experiences.

I got back to the beach and swam south (because I had paddled north already). I found a spot for cliff jumping while swimming with my buddy, so we did that for a while and then swam to a secluded beach. Really good way to end the day at the beach!

The next morning we took a bus to Pompei… like the weekend could get any better, right?! Pompei exceeded my expectations by far. I remember reading/learning about it back in either second or third grade (Mrs. Morgan would know ha), and I always had a strong interest in it, so this was really cool for me. I didn’t realize how big of a city Pompei was! I got a guided tour and it was worth it! Tons of cool info! The place is very well excavated also. Wish I could describe better, but it is hard without pictures.

We have the farewell dinners and everything this week 🙁 bummer saying goodbye to Rome and friends. 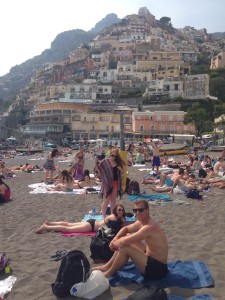