During my Easter Break while studying abroad in Limerick, Ireland, I decided to go on a trip to Croatia with four friends. There is so much I could talk about, so I will focus on my favorite part, which was the Plitvice National Lakes Park (Plitvička Jezera). We had travelled to so many cities in the past months, so it was great to do something outdoors.

We decided to stay at an Air Bnb in the park and stay the night to enjoy a full day of hiking. We were given a quaint room with two bedroom areas and a kitchen. There were a couple problems though:

As much as everyone was upset about the whole no wifi thing, I found it relaxing. Obviously I wanted to let my friends and family know that I arrived safely, but otherwise it was liberating to not be tied down to the emails and notifications stocking up my phone. Thankfully the manager let us borrow her phone to go on Facebook and message our parents. I think that this was a blessing in disguise. We stayed up all night playing games, telling stories and laughing. I feel like I really got to know all the girls I was with on a closer level and for that I am so grateful. After our first pasta dinner and round of games, we went to bed.

The next morning was our full day of adventuring in the park. We got so lucky! The weather was beautiful, 60s and sunny! We had a short walk to the third entrance of the park and from there we could take a ferry to the 1st entrance to start the hike. The park had multiple entrances and each one had different sights and paths. Some required ferries and some were just a tram ride away. We did all of them by the end of the day. The park is set up with small boardwalks that go through the many natural waterfalls in the park.

We had lunch while overlooking the biggest waterfall in the park. The water was a teal and green color that sparkled in the sun. We then hiked down the mountain to walk through the huge waterfall. Part of the walkway was flooded so we had to take our sneakers and socks off to cross. The water was freezing, but the walk was well worth it for the views! There was a rainbow overarching the two peaks of the waterfall. It was one of the most beautiful things I’ve ever seen.

Then things got serious! (Well not too serious) I left my sneakers on a wall where other families had placed their shoes to go take pictures. When I returned my shoes were the only ones left. I decided to take a picture of my shoes sitting on the wall, but then after the photo I turned to pick up the first shoe and WHAM…my shoe drops into the little stream that leads to the biggest fall in the park. I watched with puppy dog eyes as my lone sneaker floated peacefully towards the ledge and down the fall. There was no point in getting angry, so I laughed it off. There was only one slight problem…what was I going to wear for the rest of the hike?

Luckily my friend had bought her chacos along with her sneakers. The chacos were 2 sizes too big for me and I looked like a dork wearing my wool knee socks in them. At this point I was just happy to be wearing shoes. It was fine and dandy until we had to go down a series of slippery staircases. Just as I was near the bottom, the oversized shoe made my feet stumble and I fall straight on my butt on the stone steps. My hand stopped the fall, but was scrapped and bleeding. Again, I found myself laughing because there was nothing you can do.

Okay so just some minor set backs, but I believe that life is about laughing so I am just happy to share these funny stories with you. The rest of the hike was beautiful. I’ll let the picture do the talking, although it cannot even show how beautiful the sights actually were. We then headed back for another gourmet pasta dinner and games. The next day I decided that it was only right to throw my other shoe into the falls in hopes that it will reunite with its “sole” mate. (Sorry I just love puns) After a sad moment of sorrow I chucked the shoe into the waterfall! 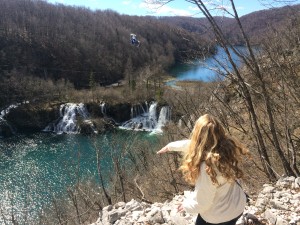 This is when I threw the second shoe metaphorically into the waterfall. 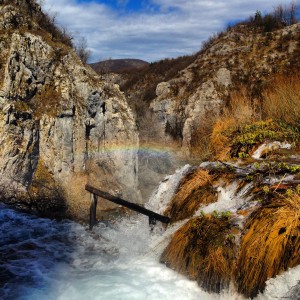 The rainbow over the biggest fall in the park!