Late Nights and Long Drives: My Trip to Geneva

This past weekend was very interesting to say the least. Though it was chaotic, there were a lot of things that I learned from everything that happened. So here is the story about my trip to Geneva.

First came the flight. Now this all started about 5 days before I left for Geneva. I had been planning on this trip for a few weeks ever since my good friend from Alabama decided to come to Europe for spring break. I started looking at plane tickets to Geneva (the city to which her flight was arriving) but everything was quite expensive so I began looking at other options. I looked at some ride share programs, buses, trains, and pretty much everything else I could do to get to Geneva that weekend. Nothing was panning out as I expected; the bus and cars took too long, and the train was more expensive than a flight so those were out of the question. Finally, I decided to look into flights to nearby cities to save some money and decided to fly in to Lyon, a French city about an hour and a half from Geneva. However, if anyone is considering this option, please be prepared for plenty of stress and thinking on your feet, otherwise you will miss your flights.

So the time came and I left from my trip on a Thursday morning, the day (I thought) she was landing in the country. I had planned for a ride share service to go from Lyon to Geneva was walking around the city waiting for the car to arrive. That is when things started to go wrong. My friend texted me from the US saying that she had not even boarded for her international flight. I would like to emphasize that this confusion was all my fault, my friend had informed me multiple times that her flight landed FRIDAY morning and not Thursday. So there I was… sitting at a café in Lyon… and I had an hour to figure out what I was going to do. If you don’t know, Geneva is one of the most expensive cities to visit in Europe. An average hotel is about 100 Swiss Francs a night (approximately the same in dollars) and the youth hostels were completely booked. After researching all of my options, I decided to stay a night in Lyon, a much cheaper city, at a youth hostel and had to cancel my ride share to Geneva and reschedule for the next day. Now everything was worked out and I thought the drama was over but the most difficult part of the trip was to come. 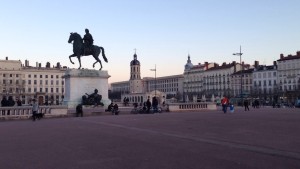 I must say, the actual part of my trip when I was in Geneva was great. I was able to see and hang out with an old friend and I met a few new friends. I was able to visit Switzerland for the first time ever and experience plenty of amazing new things (mainly fondue… its bread and meat dipped in melted cheese, what’s not to like). Then came my trip home. 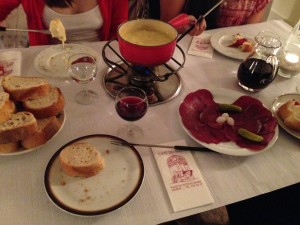 It was all planned. I had a ride share planned to take me to Lyon on a Saturday night for my flight early Sunday morning and I had organized to stay with a person from Airbnb near the airport. To those who don’t know, on Airbnb, you can rent rooms, couches, or even whole apartments from local people. Then just 3 hours before my ride to Lyon, the driver canceled his trip to Lyon, leaving me stranded in Geneva. In addition, we had just taken a bus across the border to France to try to get on a Gondola, which had unfortunately been closed for the day. It took us about an hour to get back to the apartment so I could start looking at other options. I decided to take a ride share at 1:30 in the morning the day of my flight. Thankfully everything worked out because while riding to Lyon, the driver offered to drive me to the airport for a little extra money (which was a fraction of the cost of a taxi to the airport). At the airport, I slept for a few hours then caught my plane back to Bordeaux. 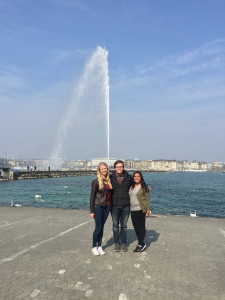 My Friends and I in Geneva!

Now I say all of this to make a point. Traveling isn’t entirely moving from hotel to hotel with amazing adventures around the corner. There come times where you get stressed and you have to make a choice. You can either decide to let the stress get to you and ruin the rest of your trip, or you can laugh it off and calmly do whatever you can to fix the situation. I remember the first thing that I did when my ride canceled the trip to Lyon, was laugh. I was an hour away from any sort of internet connection, and we were having a wonderful day, so I made the choice to stay calm. We walked around a bit, had some lunch, and headed back to the apartment. If I would have chosen to let stress about reaching Lyon consume me that day, I wouldn’t have had a good time, and now while thinking back on it, I would only remember worrying about my situation. Instead, I trusted myself to be able to fix the situation and relaxed. This choice was a result of my previous traveling experience. I only say this because this is a HUGE advantage and skill you learn when traveling. In the future, whether I’m in a work place, or traveling around the world, my adventures during this semester abroad will help me to make calm decisions when everything seems to go wrong.

Altogether, my trip to Geneva was a huge success and I will always remember the weekend for the friends I was with, the city of Geneva, (the food), and the lessons that I learned.

I can’t wait to do it all over again