Before I even arrived in Rome, it had crossed my mind to see if I could go to the Easter Mass at St. Peter’s. In January, I sent out a bunch of emails to try and see if I could get tickets, and thankfully the Bishop’s Office for United States Visitors to the Vatican answered back saying they could fulfill my request.

I lined up outside of St. Peter’s Piazza at 7:30, and then it started to rain. I had brought my umbrella, and as soon as it started to come down, everyone’s umbrella went up. I was in line for maybe half an hour until I was finally able to pass through security. Close to the alter were open seats, and then behind those two sections were areas where people would stand. Since it was pouring and everyone had their umbrellas open, I knew the seats would not be the best option. Instead, I headed straight to the standing section and was the first one in there. 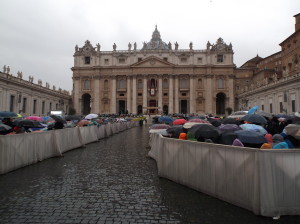 The piazza was divided into multiple of these sections, and they all had a large pathway between them, blocked off with fence. I knew that the Pope would ride through here after mass, and I was able to get right in the front corner of my section, with an unobstructed view all the way up to the alter, with no one in front or behind me. It was the perfect location. Three women from Argentina were behind me, and they had a flag, and they asked me to help them set it up so it was hanging on the fencing.

We stood in the rain for two hours, and my suit got soaked. At 9:30, music started playing, and mass started at 10:15. I was able to watch everything on one of the large television screens. About halfway through mass, the rain stopped, and everyone’s umbrellas went away. 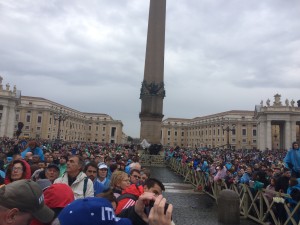 After mass, a buzz started in the crowd, and then I saw the top of the popemobile drive through the pathway. I continued to follow it around and then all of a sudden it was on our “street” and Pope Francis went right by, waving to us! I think he thought I was from Argentina as well because there I was, standing behind the flag. 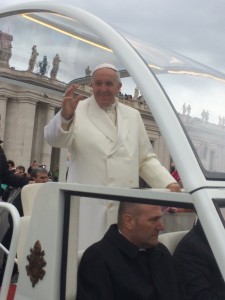 He continued to drive around, and ended up passing us one more time. He then went into the benediction window and gave his blessing. 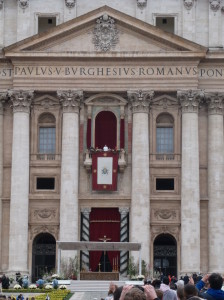 It was a morning I will never forget, as I stood in the soaking rain for three hours and was rewarded with a beautiful mass and the opportunity to see Pope Francis up close. Only something this amazing could happen in Rome.