Skiing on the Slopes of the Alps

So my time here in Italy so far has been fantastic, exciting, adventurous, scary, and so many emotions in such a short amount of time. My roommates are amazing, coming from Arizona, Minnesota, and Taiwan. My school is only a half hour away and my classes finish quickly. There are so many places to explore, and with the EXPO coming soon, every Milanese is preparing to their home to host the everyone who comes for the next few months.
There have been so many fun intricacies to learn here in Milan.  My favorite so far is learning the gestures while speaking; there are so many for each specific topic said.  Even without words, Italians use gestures for everything to show if something is good, boring, interesting, or just whatever.  Each region has their own gestures that they use, so it is even more confusing than one expects.  Also, to add to the complexity of their language, Italians have many different dialects.  Generally though, Southern Italians speak from their throats, while Northern Italians speak in a more nasally kind of way.  Everyone else speaks somewhere in between.  I cannot tell you the number of times that I have been confused and flustered because of this.

One of the first trips I did while in Europe was to go to the Alps.  I have never skied or snowboarded before, so I decided that I would try to learn on the Alps.  I practiced skiing for the better part of the day, and I can now confidently say that I can finish a run from anywhere between 15 mins to 2 hours.  It was embarrassing at first, but I am proud that I did it and never gave up.  Next time though, I think I will try snowboarding on a less intimidating mountain.

My time in Cattolica has been a blur. My classes consist of Europeans and some Americans; most are from the more northern countries such as the Netherlands.   Each class only meets for 90 minutes, twice a week.  The school is nothing like back at home.  There is no sense of the school itself; the school is just a part of the city without standing apart from it.  There are no clubs and extracurricular activities at Cattolica, except for the choir club.  This is apparently the norm in Italy.  It makes one miss the school pride back home in UA. 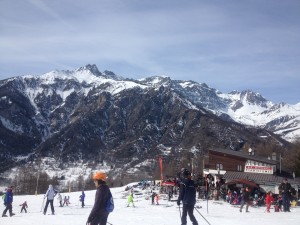