As an avid reader and current events junkie, I previously claimed I was “globally aware.” I knew about the Arab Spring, Russian annexation of Crimea, and Cuban- American relations. That qualifies for international mindfulness, right? Was I ever wrong.
Several weeks ago, I went camping in the Sahara Desert on the Moroccan/ Algerian border. It was the experience of a lifetime in more ways than one. I traveled by camel, watched the sunrise over the dunes, and witnessed the brilliance of the night sky. My feelings of awe swiftly vanished, however, when my bus approached the border of Morocco and Spanish territory.
Standing at the border was a horde of Moroccan children ranging in ages 7 to 17. When our bus stopped, the children advanced, crawling into the luggage compartment, hiding behind the wheel, and lying on the bus roof. The bus passed through three security checkpoints, as children were removed each stop. The last checkpoint had dogs. Finally, after crossing the border, I went to retrieve my backpack from the underneath compartment. When I opened the door, two frantic brown eyes looked back at me. A Moroccan boy, no more than 8 years old, took off running on Spanish soil. Illegal immigration was no longer just a CNN headline; it was real.
I couldn’t just listen to NPR anymore to become globally aware. Global awareness was first hand exposure to a 56% youth unemployment in Spain, illegal immigration from Africa, and countless political protests. It was listening to locals’ experiences with the Franco dictatorship and IRA terrorism. Global awareness was sitting on the Paris metro and feeling the racial tension in the aftermaths of the Charlie Hebdo shooting.
Studying abroad is marketed as a magical experience of travel, friendship, and cultural adventure. What I didn’t know was how many harsh realities I would face. This is the real value of studying abroad. There is poverty, terrorism, and a plethora of human rights violations occurring every day. My generation will be the change. A change that will only occur when we step out of our bubble and truly become globally aware. 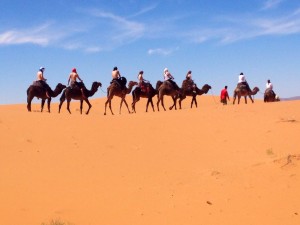