An Addition to Your Bucket List: Spend St. Paddy’s in Dublin 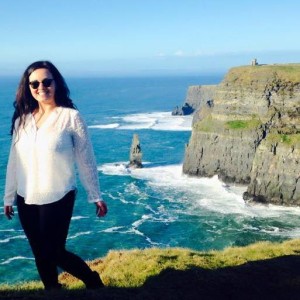 I wasn’t going to go to Dublin. “One day,” I promised myself. The flight itself was pricey, and that didn’t count the costs of spending a weekend in one of the most expensive cities in Europe. I wasn’t going to go. But then, my political science professor (God bless his soul) cancelled my last class of the week, which just happened to be the day after my 21st birthday, just a few days shy of St. Patrick’s Day. And then suddenly, I was going to Dublin.

We arrived around 10pm, and naturally we headed to the nearest pub before even checking into our hostel. The weather was truly miserable: it was rainy, windy, and couldn’t have been warmer than 40 degrees. But the Irish were getting a head start on their St. Paddy’s celebrations. Although my friends and I took a seat at an empty table, it wasn’t long before we were engaged in conversation with total strangers. It seemed everyone in the pub knew each other, even though that was unlikely. Between the beer, the music, and the people, that cold, rainy Wednesday night was one of the warmest of my semester. Until the rest of the weekend, of course.

We spent Thursday, a bit warmer and sunnier than our first night, pub-crawling our way through the Temple Bar area. After spending so much time in Spain, where the locals couldn’t be bothered by Americans, the friendly, jovial, Irish were a breath of fresh air. It was evident how proud they were of their country. The bartenders were eager to recommend their favorite beers, restaurants, and live bands to see. Speaking of live bands, I have never once heard such incredible pub music. The musicians were among the most talented, most charismatic people I’ve ever had the pleasure of being around. In American bars, music plays in the background while people talk amongst themselves, many times without giving the musician a second glance. Ireland’s scene stood in stark contrast. The music was so captivating that not a person in the entire room could peel their eyes away. They played a mixture of traditional Irish jigs and popular songs. By the end of the weekend, I preferred the Irish jigs.

I will never forget the next day, Friday, when we took an excursion to the Cliffs of Moher in Gallway. Usually, on a long bus ride like this one, I would have plugged in my headphones and tried to fall asleep until we arrived at our destination. But as soon as our bus left Dublin, I knew this time would be different. The Irish countryside was absolutely breathtaking- rolling green hills peppered with sheep and cattle, trickling streams, ancient stone castles and beautiful cottages. Our tour guides were, like everyone else in Ireland I had met, kind-eyed, Irish to the bone, with mouths like sailors and fantastic senses of humor. We spent the 4 hour bus ride laughing and listening to Irish music.

We got to the Cliffs in the early afternoon. Neither my description nor my pictures will do them justice, but I highly recommend going. Nothing will make you feel quite as beautifully small as standing on what feels like the top of the world.

For the rest of the weekend, we celebrated St. Patrick’s Day the Irish way- drinking beer, singing and dancing to Irish music, and treating complete strangers like we had been friends for years.