I cannot believe I am already packing my bags and preparing for finals. In some ways it seems like I just left the United States but in other ways it feels like I have been gone forever and have no idea what songs are even popular at home. Luckily I have all summer to catch up on the latest news, movies, and songs! Being abroad is one of the greatest, hardest, frustrating, and most adventurous things I’ve ever done and sometimes you feel all of these emotions throughout the course of one day! One thing is for certain when you’re abroad, that you can never predict where or how your day is going! Looking back I always remember the great days rather than the harder ones but I don’t want to lie to anyone and say there wasn’t hard days, just know that the good days outnumber the hard ones! Returning to the United States is going to be pretty weird but a comforting feeling, however I won’t be coming back the same person I left. Being here has taught me so much about European culture, history, and of course food, but mostly I have learned so much about myself. I learned how to handle stress and change while dealing with a new sense of independence from my family and friends, and also completely stepping out of my comfort zone. I learned to balance planning trips, traveling every weekend with school work and cooking for myself (a big deal for me!) while also not having target or a car when I needed something quickly or inexpensive. I also found even more admiration for the United States (something I didn’t think was possible!) thanks to the Italians and other Europeans. It constantly shocked me how much they all knew what was going on in our political system and also how much they spoke of the influence and power of the U.S. internationally. I’ll never forget when my teacher told us that Italy did not have the military means or power to even have a chance of fighting against terrorism, and she told us we were lucky to be American. It was a really nice feeling to hear that because many times The United States is heavily criticized by people even in the U.S. so hearing that was extremely comforting and shocking.
Although I am very excited to come home to the U.S. for Summer, a part of my heart will always be in Italy and Europe. I will miss traveling every weekend and the adventures that came along everyday even if at the time they were not so funny (lost baggage, falling in the rain in Greece, missed flights, and bad hostel experiences). So for the end of my blog posts and trip I will finish with my favorite quote from the movie The Nanny Diaries, “There’s a common belief among anthropologists that you must immerse yourself in an unfamiliar world in order to truly understand your own.” 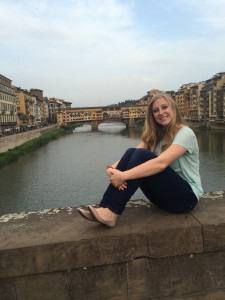