Gearing Up for the Green Hills 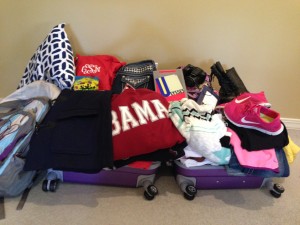 I never thought that I would be packing for all four seasons in one small suitcase, but here I am. I’m still not sure how I’m going to do it. In just over a month, I’ll be departing my quiet home in the Mississippi country for a five-week adventure in the gloriously green hills of Ireland, and the packing is nothing short of a colossal challenge. I’m trying to pack coats in with shorts and rain boots in with sunglasses. You would think I’m leaving for a year. As a student at the University of Alabama, I thought I knew what bipolar weather was like, but apparently Ireland has weather as unpredictable as a slot machine. But packing–as challenging as it may be–is only a small fraction of the preparations I’ve been undertaking months in advance. From the day I was accepted to the UA in Ireland program, I knew that I was going to have to gear up for much more than just unreliable weather.

I’ve travelled abroad to Europe before, and each new country I entered has been a separate challenge filled with cultural differences and social barriers. But it’s the challenge that attracts me to traveling in the first place–the idea that life can be so different in a place just across the ocean. That’s why I knew from the moment I stepped foot on the Alabama campus that I wanted to study abroad. The opportunity to immerse myself completely in a unique culture was enough to inspire me to look at different programs, but the opportunity to actually study there and apply everything I’ve been learning in the humanities firsthand was what truly motivated me to begin to save up my money.

Choosing the UA in Ireland program really didn’t seem like a choice at all because it happened so quickly. Initially, I knew that I wanted to participate in a program that offered summer courses in English (my primary major), and I knew that I wanted to travel somewhere that was really going to be beneficial to my educational goals. My interest in music and my love of cultural literature brought me straight to the UA in Ireland information page, and, let’s face it, at least some of the draw was related to my dream of writing poetry in the Irish countryside. I ended up applying to about four different programs in various countries, placing Ireland as my top choice. Since the Ireland program only took 10-12 students and required a personal interview, I was almost certain that I would eventually have to result to my second choice, but I was prepared to wait however long it took just for the chance. I remember a few weeks later seeing an email on my Crimson account asking about times for an interview. I stared at the screen for at least five minutes straight before actually believing what I saw and calling my parents in an excited daze. I couldn’t believe how quickly the review had taken and how lucky I was to get the opportunity to interview. Less than a week later, I was accepted to the program, and I was so certain that this was the program for me that I was ready to pay the whole fee on the spot.

Now, nearly half a year later and a month away from boarding my flight, I’m just as certain. I’ve spent countless hours researching Irish culture and geography, wondering if this experience is even real. I’m preparing myself to be immersed in a place that is completely unique from any place I’ve ever been to. I know that there will be emotional, physical, and mental challenges. I’ve experienced some of these in little week-long trips that I’ve taken abroad, so I imagine that they would only be multiplied in the amount of time I’ll be spending in Ireland. To ease my mind, I’ve planned out most of the excursions I want to take while I’m there, which will cut down on a lot of stress. I’ve also talked to people I know who have been abroad before and asked them about their experiences, which is going to be really helpful for me emotionally. There are also safety concerns that I’ve had to address just to make sure that I’m as prepared as I can possibly be for anything that might happen. Packing, which is crucial, somehow seems to be the least important item on my agenda. But I’ve had plenty of time to consider possible problems I might encounter and address them head-on before stepping foot in the first airport, and that has made a huge difference in my peace of mind.

As I check off the last few items on my to-do list (and somehow close the zipper on my overstuffed suitcase), I know it’s time to look ahead to the adventure that I’m about to embark on. Studying abroad truly is a once-in-a-lifetime experience, and I’m really excited to find out exactly why that is. I expect nothing less than five weeks filled with foreign culture, weird food (that of course has the potential to be good), and abounding educational growth. I want to see all the sights and talk to the locals. I want to be a part of something bigger than just the University of Alabama. I want to be a part of a world that’s home to places only a plane ride away that are so vastly unique. But, most importantly, I want to be a part of a world that’s connected through these differences, and even because of them. I want to be that connection. I want to represent a college, a state, a region, a country, and a world that, despite its rich diversity, is unified. And I’m more than ready to cash in my plane ticket for a chance to see that happen.