One of the first things people ask me about Cuba is “how was the food?”

I didn’t really have any idea of what Cuban food might be like before traveling to Cuba, although I had heard there is an abundance of organic fruits and vegetables. I was completely right! Little farmers market style shops (most of them were state-run, I believe) called agros were extremely common and had a selection of the season fruits and vegetables. The most abundant fruits were pineapples, guavas, papaya (although in Cuba they are called frutabomba), watermelon, bananas, and mangoes. Vegetables included tomatoes, peppers, onions, green beans, cucumbers, broccoli, carrots, garlic, and some type of squash. The national fruit of Cuba, the mamey, I only tried once. It looks sort of like a rough, brown pear but the inside had the consistency and flavor of a baked sweet potato. I prefer a mamey milkshake to the fruit itself. One of my favorite Cuban vegetables was the boniato, which is like a white potato but a little bit sweet. It was so delicious smashed up with salt and pepper or sliced and fried like chips! Juice was also very popular and was sold both in open-air stores like agros or in the grocery store. My favorite kinds of juice were pineapple, tamarind, pineapple-guava, and orange. Mango was good if it was fresh, but it went bad very quickly because these juices don’t have any sort of preservatives.

Besides the agros, there were grocery stores and lots of places to go out to eat. The grocery stores are a little different than the United States. First, you have to leave any large purse or backpack at the bag check. Secondly, you never really know what they are going to have. Some days the aisles would be filled with food, other times they would be near empty. Bread is sold in a completely different store, sometimes with pastries and cakes. The grocery store usually had meat, but you could also buy meat in agro-type open air shops as well. I didn’t try the meat because I am a vegetarian, but I heard that it had a smoother consistency than meat in the US. What surprised me most of all was that Cubans generally don’t like spicy food!

Overall, the availability of cheap, organic produce was awesome, even if finding other items at the grocery store was challenging. I’ve been cooking for myself for years, so working with limited spices and ingredients was challenging but also a little fun. My roommates and I ended up making a lot of weird food combinations that turned out delicious, like bean pasta or tomato sauce with pineapple! 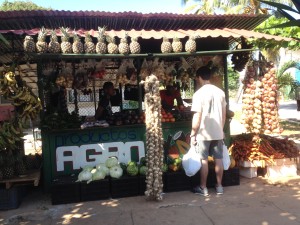