This is my first blog post on Bamabloggers abroad, but I couldn’t be more excited to share what I have encountered and learned so far with y’all.

First and foremost, my name is Katie, and I am currently living in Kyoto, Japan. My university (or Uni, as all study-abroaders here call it) is Ritsumeikan University, a private school with a large 留学生 (foreign student) population. I am living in the University’s International dorm with 50 other students, who are from all over the world. I have only taken one formal Japanese class (JA201), but I placed out of both 101 and 102.

Now for a little background on Kyoto.

Kyoto is the historic capital of Japan. The kanji (Chinese characters) for Kyoto are 京都. The first kanji means “capital” and the second means “city.” This ancient names demonstrate the historical relevance of Kyoto to the whole of Japan (compared to Tokyo, which means Eastern Capital). Luckily for us tourists, Japan places a great deal of pride in its history and spends much effort in persevering such history, meaning that there are many awesome sights to see, especially in Kyoto, that will take you back to bygone times, particularly Japan’s Edo era (during the European Middle Ages), a time that Japan was closed off to all foreign societies. Super cool, huh?

Japan’s school calendar begins in April and ends in January. This may be considered strange to westerners, as schools begins in September for most, but April is considered by the Japanese to be the beginning of the year–a time of regrowth and revival after the desolation winter brings. When school begins, the famous 桜 (sakura/cherry blossoms) are in full-bloom, and everything is becoming green once again. It is considered by most to be the best time to come to Japan, as the weather is also the most temperature. My university follows the traditional Japanese calendar, so I started April 7st and will return home in early August, making the Spring Semester the more favorable semester to study abroad, in my opinion.

I am taking the Japanese intensive language track here at Ritsu, along with Japanese Society and Economy classes, taught in english. Class periods are 1 hour and 30 minutes long, with a campus-wide lunch break from 12:10 to 13:00. My typical day includes between 1.5 hours to 6 hours of class and time to socialize with friends at lunch. Even though school is very rigorous for all students, most find time to join a circle or a club. Clubs here are the equivalent to UA’s sports teams, but clubs encompass more interest areas than that, including debate, art, orchestra, politics, etc. Their less time-consuming counterparts are circles (サークル), which are more accessible to foreign students due to their decreased intensity. As I have an interest in the piano, I joined the Piano Circle, but I will save details of my experience there for another blog post.

The biggest and most obvious difference between life here and life in America is the abundance of public transportation and bicycles. Nearly everywhere in Japan is accessible by either train, bus, or bicycle. Walking is also a favorite here, especially for tourists, as most famous places are usually within an hour or so from the nearest train station or bus stop. Japan has a reputation abroad for its efficiency and punctuality, and it does not disappoint. Everything is on time, always. Period. Getting to school in the morning requires a 15 minute bike ride from my dorm. Traveling on the small, narrow streets of Kyoto every morning has really allowed me an insight into average Japanese life. Kids playing on the street, school girls in their uniforms waking home from school, elderly folks talking to their neighbors, and lots of dogs running around, dressed in the strangest things (yes, many people dress their dogs every day in different garbs, reflecting the season and weather) are some of my daily sights. It is also the time when I truly feel the reality that I am living in Japan. The language barrier sometimes gets me as well. It’s the strangest feeling to walk into the supermarket, expecting to see the products you’ve seen all your life and hear the random chit-chat of strangers, and then to pass through the sliding doors into a world that is completely unfamiliar, foreign. As more time passes, I have gotten more and more used to life here, and honestly, I wouldn’t change a thing about those aisles, which I have come to find quite endearing.

Attached are some pictures of some of my excursions. Enjoy! 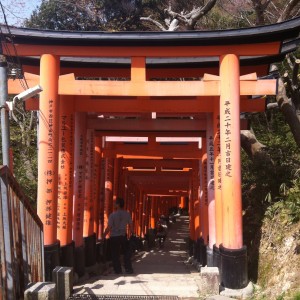 One of the most famous shrines in Kyoto. 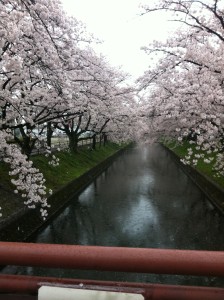 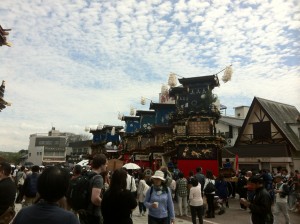 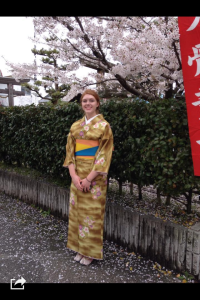 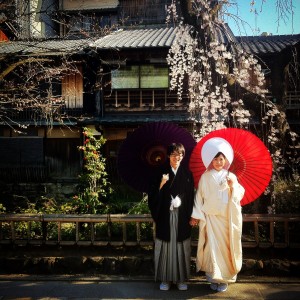 Married under the Sakura!