We have been requested to write a blog upon returning to the States. I hesitate, because my return has been so uneventful, that I fear I would be boring everyone to write about it. And I am under no illusion that my thoughts and reflections are so profound, that anyone would desire to read them on their own accord. However, the bland and uneventful nature of my return is precisely what needs to be shared, I suspect, as it is a bit of an adjustment to the hustle and bust, adventure and excitement of studying abroad.

First, three words that are repeatedly shared: reverse culture shock. Even for those who are seasoned travellers and did not find themselves experiencing much initial culture shock, its reversal upon return can be especially difficult and unexpected. While there are many aspects to it, I was initially confronted with the following:

1.) Reverse homesickness- While I have NEVER been one to get homesick (I attend the University of Alabama while my parents live in Colorado), I have found myself missing Sevilla. My host mother, my roommate from Chicago, the river and bridges that made up my daily runs. Even though Colorado is a beautiful place to return to, I find myself reminiscing often.
2.) No one really wants to hear-While I have been bombarded with texts and warm welcomes home—all filled with the phrase “I want to hear ALL about Spain!”—it becomes clear after a brief text or one minute response, that this is more of a courtesy than anything. And, can you blame them? There is only so much that people can understand and relate to when discussing your adventures abroad, and it takes a special person to have the gift of listening patiently to tales and adventures that you had, that they were not able to be a part of.
3.) Frustration with home culture-I immediately landed in the Atlanta airport and was struck by complaints and bigotry that made my blood boil. Comments about internationals, foreigners, requiring English, long lines, poor service, on and on and on. Jet-lagged and weary from travelling, it took more self-control than I would like to admit not to walk straight up to some of these individuals and ask them to start acting like mature adults and leave the whining to the children. (Upon reflection, this would have been decidedly immature and completely hypocritical to the point I would have been hoping to make).
While all this has come to pass, I have not found the transition as difficult as expected, and I truly believe that it is due to mental preparation. This sounds much more official than I intend. What I mean is: because I was warned and expecting reverse-culture shock, it did not hit as hard as it might. For example, I see missing Sevilla as a blessing and a sign that it was a semester well spent. I have remembered to ask my friends what happened here in the States with them while I’ve been away, never forgetting that their lives went on in my absence. In addition, I have kept in touch with friends made abroad, so that we can share stories and memories with one another, without expecting friends and family back home to listen patiently to stories that, after time, just become annoying to those that did not have the opportunity to participate. Finally, I have spent time to intentionally remember what I love about America (‘merica!). As cheesy as it sounds, it is important to remember while I love the land of the free, my right to bear arms, the low unemployment rate, and the quality education that I have been blessed to receive here. And while there are many things about Spanish culture that I plan to take home with me (can anyone smell the Spanish tortillas?), there are many reasons I am thankful to be home. 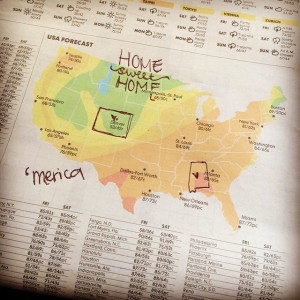 Doodling on my international flight back to the States