Well, my glorious four week adventure in Spain has finally come to an end. I’m sitting here in my living room, back in my own house, eating goldfish and catching up on TV. It seems kind of dull when I compare it to what I was doing just a week ago. 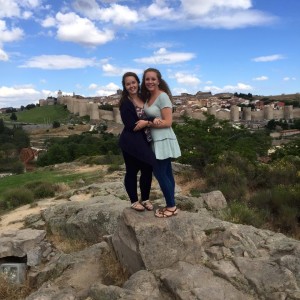 A friend and I in front of the beautiful and historic Ávila.

I am so grateful for my experience in Spain. I learned more about the culture, people, language, and life style of Spain than I ever anticipated. It was nothing but GO GO GO for a month straight, so I was completely exhausted, but honestly I would have stayed two more months if I could. It was insane how fast it flew by. It feels like one week at the very most! Despite the warp speed at which the time passed, I still grew accustomed to a lot of things abroad that I’m having to readjust to here.

Europe loves pastries. Flaky bread, fruity flavors, and chocolate covered carbs are all basically the life blood of Spain. Now you might think “America has that.” But you would be wrong. America has some great pastries, but it’s different. On every corner of Spain’s streets there was a pastelería (bakery, pictured below). They were beautiful and delicious and just plain fun to be in. My friends and I would stop for a coke and a biscotela between classes and it was something I really enjoyed. So not having access to those flaky Spanish pastries really has me down in the dumps. 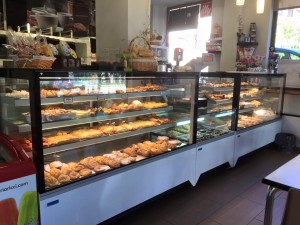 One of our favorite pastelerías.

There are three basic differences between eating out in Spain and here in the US. Tipping, checks, and water. In Spain, you don’t tip. Servers work for salary, not for tips, so no need to calculate 20%. However, this also means they are in no hurry to serve or please you. I’m still shocked when waiters come back to the table to check on me here in the states. Now as far as checks go, Spain doesn’t separate them. I don’t understand this, and it causes great difficulty when you’re with a large group. Even Manuel, my Spanish conversation partner, admits that it’s a terrible system. So shout out to America for separate checks. Finally, water is free in the U.S. Thank goodness. And it’s cold. THANK. GOODNESS. Spain isn’t crazy about ice, and room temperature water doesn’t bother them. If you want cold water, you’re pretty much stuck buying a bottle of it, which will definitely cost more than any beer or wine… So I hear.

I spent the last month surrounded by 53 other Alabama students. We went on an adventure together and explored another part of the world. We slept in the same building, we rode the same bus, we ate the same food, and we complained about that food all together. It was so much fun to spend time with people my own age, all excited about the same things. Now here I am, back in the states, and though my family is AMAZING, I find myself missing those crazy college kids. Study abroad as I did it, in a large group, is such a unique experience that it kind of bonds everyone in a way that regular classes or solo abroad experiences don’t. So even though this isn’t culture specific, my time in Spain will always bring back memories of the amazing people I was with, and all the fun times we had. 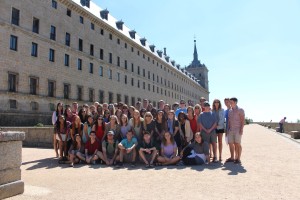