The past couple of weeks have been filled with excursions to Madrid and surrounding cities, including visits to Toledo, Segovia, and Cuenca, historical destinations rich in tradition and culture. Last Sunday, we took a trip to El Rastro, Madrid’s flee market. The streets of El Rastro are lined with motivated vendors, ready to do (almost) anything to make a sale. El Rastro is a common Sunday morning activity for locals and tourists alike, and you can find almost anything, as long as you’re willing to do some searching.

Following El Rastro, I decided to stay behind with a small group of students interested in watching a bull fight, known as La Corrida de Toros. Although bull fights are a major part of Spain’s history and culture, today the are loosing their popularity and becoming more and more controversial. Some cities, including Barcelona, have made bull fighting illegal; the most popular cities for bull fighting are Madrid and Segovia. 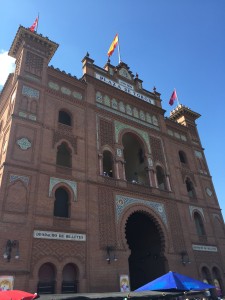 Upon arriving at the Plaza de Toros, we purchased tickets (on the sun side of the colosseum, to our dismay), found our sweltering hot seats, and waited. After the matadors entered the ring, the first bull was brought out. There were four rounds to each bull fight (unbeknownst to us, there are six each night). First, three matadors tire the bull out by capes, followed by one round with matadors mounted on horses and two with matadors on foot, with the final matador alone in the ring. Sparing any gruesome details, of which there are many, the death of the bull is intended to be quick and respectful, keeping in line with the tradition of La Corrida de Toros. 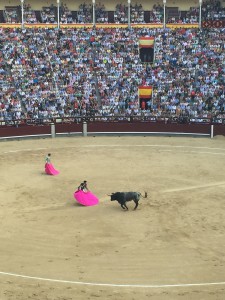 I have to admit, before coming to Spain, I wasn’t entirely sure what a bull fight involved; to many Spaniards, going to a pre-dinner bull fight is similar to attending an afternoon baseball game. The atmosphere is casual but crowded, and generally very chaotic. I have mixed feelings about the fight itself. While I can both understand and respect the tradition surrounding La Corrida de Toros, I’m not confident that the death of six bulls is a justified form of entertainment. Am I glad I had this experience while in Spain? Absolutely. Will I go to another bull fight? Undecided.