No Plan is the Plan

Back in Tuscaloosa, it seems like every one of my days is planned down to the “t”.  With multiple organizations I am involved in along with my chemical engineering major, I am kept very busy, and if I don’t have a game plan going into a day, I would quickly be lost.  Here in San Lorenzo de El Escorial, Spain, I’ve experienced a great adjustment, as my way of living back home no longer applies and a more relaxed and laid back approach to life is the way to go.

One of the best ways to describe what life is like here in Spain, is to describe a typical dinner in the small town which I currently call home.

First:  Take your preconceived notions of when to eat a meal, and throw them out the window.  Spaniards eat much later than we do so you won’t find people eating dinner until around 11:00 at night.  Second:   You will be eating outside whether you like it or not.  Personally, I really like this part of Spain as it typically feels great sitting outside where I live.  Also the lack of A/C in many of the restaurants makes sitting outside a lot more comfortable.

Third: Two groups of people could be sitting in adjacent tables and be in two different restaurants.  There really isn’t a fine line of when one restaurant begins and another one ends.  You usually just see the main store behind a sea of umbrellas and hope that they correspond.

Fourth: Don’t be in any hurry.  Once you sit down to eat, you’re not going anywhere for a long time.  Between people watching, listening to the occasional passerby accordion player, the multiple course meals, and simply talking with friends, I can easily spend two hours eating a single meal.  In Spain there really is no time crunch, and some of the best moments I’ve had here have been while at a meal. 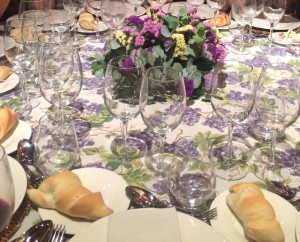 I believe that being able to take a step back from the constant scheduling back home has forced me to stop and truly appreciate all that Spain has to offer.