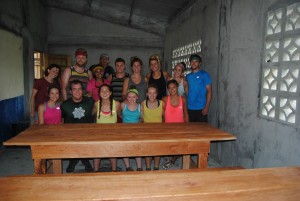 The main aspect of any Alabama Action Program is service work. Our main service project through Outward Bound took place on Isla Popa, a small island community off the cost of Panama. We had kayaked about 8 miles through the Caribbean Sea to Isla Popa. Of the 9 days we spent traveling Costa Rica and Panama 2 of them were spent on this island helping the indigenous community.

While there we sanded down slates of wood and nailed them together to create four tables and four benches for the kids to use in their school cafeteria. The slates of wood were cut down directly from trees on the island. We hiked about half a mile through the jungle on the island to reach the place where the wood was being gathered. We passed all sorts of plants and animals that one would never see in the United States. After gathering the wood we hauled every piece back through the jungle to the place where we would assemble each table and bench.

A few of the father figures of the community spent the week helping us work. Even though there was a clear language barrier between them and us, it was amazing to see how that rarely effected our ability to communicate. A few people on our trip were fluent in Spanish and most of us knew phrases to get us by which helped out a lot. The members of the community also worked their hardest to understand what little English they could from us. I do not think it is really clear to those of us who have grown up in the United States what exactly it is like to have to live and work in a community that does not speak the same language. In many places around the world more than one language is present in the same region and that can make doing life difficult. I appreciated the few days I spent working with the people on the island but I cannot even imagine what it would be like to have to work every day with people who do not speak the same language as myself.

While we worked the kids on the island spent most of their time either observing us or submerging themselves in our work space. When we needed breaks we would play with the kids and when we needed to work they were right alongside us asking for sandpaper they could use or slyly taking our cameras and snapping pictures of everything they could. The spirits of the kids were full of joy and even though some of them did not have shoes or walls on their houses they were some of the happiest kids I have ever seen.