The Pictures are Posted

Well, I have been back in the States for a week now. After being tagged in hundreds of pictures and posting about 90 of my own, I am definitely reminiscing about my time abroad. I am glad to be back in the land of Diet Coke and free water, but the adventures I had in Europe will last a lifetime and so will the friends.

The best part of my trip was the people I was able to share it with. All of the people I was with were accounting students at UA. Although I knew very few of them before going on the trip, I made friendship that I hope to carry on through the rest of my time at Alabama and even after. The trip would not have been nearly as fun without them.

Out of the three countries I went to; Germany, Belgium and England, Belgium was my favorite. The city we stayed at in Belgium was called Ghent. Ghent is about a 40 minute train ride from Brussels, the capital of Belgium. Our hotel was right on the canal and a block from the city center. Ghent is a college town with a university of over 41,000 students. The town was smaller and quaint but still had plenty to do.

The first night we were in Ghent, we stumbled upon a food truck festival. In the middle of the city center, right in front of a huge Gothic-style church, there were about 50 food trucks and stands that were selling local cuisine and international food. In the middle of the food truck circle, there was a huge bar with a DJ and a dance floor. I had amazing tacos and several of our group hung around to talk and people watch. Unfortunately, that night was the last night of a 5 day food truck festival. That being said, it was probably a good thing it was the last night, because if not, we would have been there every night.

Overall, my trip was absolutely amazing. I am missing my friends and the constant adventures already! Can we go back? 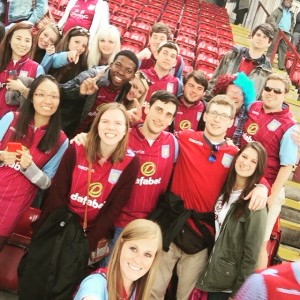