The Plane is Half of the Adventure

I belong to a rare group of human beings.  One that has never been past the security gates of an airport.  One that has never seen firsthand what the Earth looks like from up above.  One of the few that have never in their lives flown in an airplane before.  Usually telling people I’ve never been on an airplane before works great for when I need a random, bizarre fact about myself for ice breaker games.  It has been my go-to for years (despite it being a somewhat lame fun fact) and it usually elicits a few cries of disbelief.  Today, I’m going to have to start thinking of a new fun fact for myself (hopefully a more interesting one) as I am travelling for my study abroad to Spain on my first plane ride ever.  Don’t get me wrong, I have been anticipating this trip for an entire year, but I would be lying if I said that I wasn’t also greatly anticipating the plane ride.  I laughed at myself a little as I was packing just thinking of how a trip so mundane to many people is so monumental in my mind.  I had no trouble waking up this morning at a crisp 8 AM as I had a big day planned.  A day of many firsts.  For a first flight though, I chose quite a daunting trip.  With 8 ½ hours ahead of me, crossing 4,322 miles, I sure hope that flying and I mix well!

Luckily I managed to get a window seat on the plane where I’ll be able to see both the sun set and rise, as well as just what it’s like to be above the clouds.  I may or may not geek out for a little bit as we rise above the ground, and a few pictures may or may not be taken, but I cannot wait for what truly is the adventure to start a whole string of adventures this summer.  Hopefully, I’ll have more than enough interesting facts to choose from after my trip abroad. 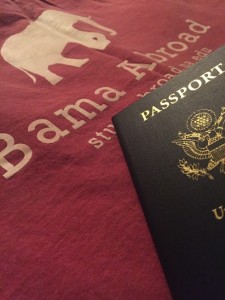