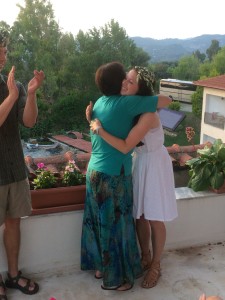 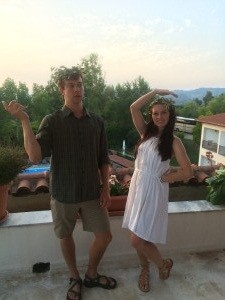 UA in Greece had reserved seats at our buffet breakfast at the hotel in Olympia this morning and it wasn’t half bad! I even tried another type of tea with honey, and my roommate only had to help me a little bit in making it.

We traveled about 10 minutes down the road to Ancient Olympia, the site of the ancient Olympics. We lectured under the shade of a tree on some stones and a dog came and laid by Holly and me.

From there we jogged through the tunnel into the stadium and held our Olympic races. The men went first and decided to run extra distance but Stephen was victorious. Next the ladies went and Elliot caused some to false start, so they would’ve been flogged in ancient times. I ended up winning! I told everyone at home if I didn’t win I wasn’t coming home. My dad told me that even if I don’t win, losing wouldn’t lessen my experience of Greece. It wouldn’t have and I still don’t want to go home. It was the hottest day by far of the 2 weeks thus far, perfect for physical exercise.

From there we saw where they lit the Olympic flame and it was super cool! Amazing how that tradition is still carried out and lit in Greece every Olympics.

From there we went exploring through the museum and ate at a restaurant by the museum.
We all swam again at the pool since it was so hot and the pool felt amazing.

After the pool we went back to our room to do homework and relax.

We did our daily quiz before dinner and then did the Olympic champion ceremony. We were announced as son/daughter of father, from city of ___ from ancient state of ____. Was really cool.

We’ve interacted with locals, as well as other foreigners (even other American students) and every experience has been worth it. I try to speak what little I know of Greek at every interaction because it really does go a long way and is so appreciated. Watching Dr. Summers interact with everyone so seamlessly makes me want to try even harder to have these experiences.

I have loved this trip so much so far that I don’t want to go home but our time is counting down. I’ve learned so much from this experience, my first time abroad, and know that I have changed for the better from it.