“When good Americans die, they go to Paris.” -Oscar Wilde

I intend to live a long life, so waiting to see if Wilde was right seemed like the wrong path to the City of Light.

My name is Allison and I am a rising sophomore majoring in English with minors in French and Theatre. I’ve known I wanted to study abroad since I started studying French in seventh grade. As much as I’ve worked to learn the vocabulary from books and mimic the pronunciation of my teachers (Shout out to Mme Zupancic for the most helpful class (421) I’ve ever taken.), there is nothing like being immersed in a language to make it really stick. Also, while my family has traveled a good bit here in the U.S., with a family of five the plane tickets alone made seeing Europe pretty much out of the question. Even now, I understand that these study abroad programs are expensive. However, Alabama has a fantastic scholarship program that can put these experiences within reach. In addition to the CIP scholarship, I am using money for a semester of tuition and the summer stipend from the National Merit Finalist Package. (If you are a potential student, this is still in play for you possibly, and I highly recommend taking the PSAT just to see what happens.) Anyway, the expenses for my family have been reduced a lot.

Timing is also really important to consider when studying abroad. For me, this summer made sense for several reasons. First, this is the summer the stipend money is allocated for. Second, in future summers I hope to be doing research or longer-term internship programs, which would make going abroad somewhat difficult. Lastly, with any luck I hope to study abroad for a full semester some time later in my college career, and this summer experience early on can help to inform the decisions I make then.

As for the location, there was never really any question. Most French classes in America teach French as it is spoken in Paris. (The all-knowing Mme Zupancic wants her students to shoot for the pronunciation for someone whose family has lived in Paris for two generations.) A lot of other French speaking countries had the language stomped into them by colonization and so it is mixed with local languages and is now pretty far from Parisian French. In addition, Paris is one of the world’s greatest cultural and historical cities. The UA in France program spends one week in Paris to see as much as possible of the cultural sights there, followed by four weeks in the central French city of Tours. This combination of experiencing the wonders of Paris with intensive study and immersion was what attracted me to the program.

Preparing for a trip is different for everyone. I have friends who probably would have started packing and making checklists a month ago, but my plane leaves Tuesday morning and I fully intend to pack Monday afternoon. As for more intangible preparations, while I haven’t been meditating or anything to get ready, emotionally and mentally I think previous trips and going away to college have prepared me to be immersed in another culture. People everywhere, for all their cultural, social, and political differences, want to be treated kindly and with respect.

I have finally gotten around to packing that suitcase and it really wasn’t too complicated. 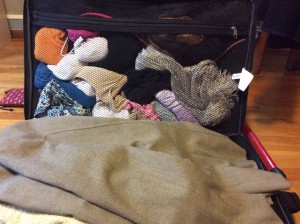 I pride myself on packing light.

I ended up having more room than I expected, so I have enough clothes to go a week and a half to two weeks without doing laundry. I also have a good pair of walking shoes, some sandles, and some dress shoes (but nothing with really high heels, because I do want to be able to get around). I also made sure to have a good umbrella and some jackets in case it gets cold. From my travel in the U.S. I would mostly recommend looking up the weather for whereever you’re going and planning for variety. (In addition to the jackets I have a swimsuit. Hopefully in July it will be warm enough to swim.) As I packed, and as I get ready to leave tomorrow, my main process is to have a second pair of eyes (in this case my very helpful mother). I also went through the packing list the professor sent a couple times to make sure I had everything.

Probably the thing I put the most thought into when packing was a gift for my hostess. I was told she is very interested in art, so after much delibaration and at least four stores, I found cards with paintings of local sights and monuments. They are very pretty but they also don’t take up very much space. I’m also taking some pecan chocolate candies because pecans are pretty rare in France. For my cousins I’m taking some chocolate chips they asked for, because the mom of the family loves to bake and can’t find the kind she likes in Germany.

This will be my first time abroad, but I live pretty far away from Alabama, so in a lot of ways being away from family and friends isn’t new to me. I left my high school friends for school, and while it was nice to see them during this first half of the summer, I’m used to being away from them now. My college friends are spread across the country during the summer too, so again it’s not as if I’m leaving some grand social life. I admit I’ll miss my family, but again they aren’t around during the school year, so it will be like any other semester. 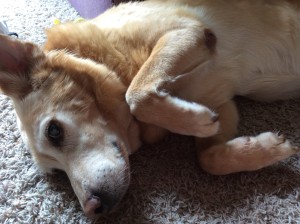 He’s collapsed on the floor in despair.

Just like any semester though, my dog Ivan is pretty clearly heartbroken that I’m leaving.

Mostly I’ve been thinking about actually being there and doing things. I’m a little curious as to what it will be like to visit Germany, as my German is basically zero. However, I will be in the very capable hands of my cousins, and it will be nice to see them again. In France I am much more confident of my abilities, though I worry sometimes that I won’t be able to keep up. I do trust that the classes will be very helpful and that if I do slip up people will be understanding. Overall I’m extremely excited for this experience and I can’t wait to start my adventure. I’ve probably told all my friends and family far too many times how excited I am. Now I’m telling you. Congratulations on joining the club. 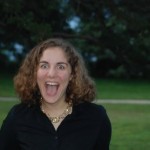 “Have I told you I’m going to France?”

I am trying to go into this trip with an open mind. Of course I have some preconceived notions about what I’ll get out of the trip. Those are fairly unavoidable. I really do hope to improve my language skills and with the intensive classes and immersion I think this is an attainable goal. I also want to learn about another culture. There’s so much that can’t be learned from books that will be all around me. Perhaps more frivolous (but also more tasty), I hope to learn about French food and cooking. I’ve learned some recipes here in the U.S. and liked them and it will be cool to learn something more authentic. Along with the food, I’m so excited to experience a country to rich in art and history. I’m excited for the performances my group will see in Paris, as well as movies and other cultural events in Tours. Above all I suppose the real way to experience France will be to meet people. From the emails we’ve exchanged so far, my hostess seems very nice, and I’m sure there will be a myriad of exciting people to get to know both at the institute and around Tours.

Next stop: Stuttgart, Germany. But first I have to make my flight.