While being here in Barcelona, my level of appreciation and respect has grown tremendously for not only Spain and all of Europe, but for my home country America. Being here I have adjusted to the customs and ways that Europeans follow. Although it was kind of tough at first, I have grown into it. Unlike in America, society here conserves energy and water use. For example, when staying at hotels you have to have to put your room in and out a slot to use the electricity in the room. Additionally, air conditioning in households is a luxury here in Spain. At my apartment my roommates and I use dozen of fans to stay cool.  I know several other students in my program who live with Spanish families that can only take 5-10 minute hot showers since the hot water tanks are not as big as the ones back in America.  Aspects such as these make me respect those who live here and appreciate the living advantages I have back home in America.

Almost every day in my business classes we compare the economic lifestyles of Europe and America.  We look at the differences between the two on wages, work ethic, and stability. My international business teacher stated that America biggest advantage compared to other countries is that we are hard workers and do not settle. She continued by stating that America sets high standards which can be an advantage and disadvantage. I evaluated her statement and realized that it was very true. Coming here as a student to Spain, I was open minded but characteristically I expected customer service and support to be just as the same. People here do not work for tips and gratuities therefor in some cases their level of customer service is not high as it is in America. Knowing this now, made me question how many times I did tip or did not tip for great service back home at a restaurant or an event where I was being catered to. Furthermore, I have learned to expect the unexpected in every attribute such as customer service. 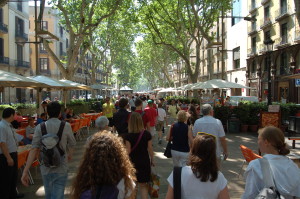