I’m leaving for Belgium in 11 days!

I’m getting pretty excited for my trip! I’m starting to get all of my stuff together and ready for the trip. I’ve purchased the ticket(Delta:D), a new backpack, a new suitcase, some dress shoes(because I’ll be visiting important places, and a power converter(it’ll be a lifesaver).

Lets start off with what made me choose to study abroad, which is actually pretty easy. I’ve never traveled anywhere by plane, so I really wanted to do that, and I wanted to experience what its like in another country, you know, without all of the American amenities, and study abroad was the perfect thing to do that with, especially because I don’t have to stay for months on end. I really leaned on doing this freshman year because, every year after this one, I plan on doing summer internships, and studying abroad would get in the way of that, so logically, this was the only time. Location played a factor in this as well because I wanted to go somewhere in Europe, because I’m not a fan of shots, so Africa was out of the question, and I don’t want to be detained, so Asia was out as well. The main thing I had to consider before going abroad was the time commitment. I really love this country, and it took a lot for me to decide to leave it, even if it is for a month, but I decided to do it anyway, just so I can have the experience.

I’m preparing to go abroad by getting everything I need ahead of time, which should be a given, but I’m also learning key phrases in French. Even though I won’t need to learn their language(because its Europe), its still best to know some French, because even though a majority speaks English, all of them don’t. Physically, I’m just cutting back on foods to prepare myself for the smaller meal sizes in Europe. I’m a Southern American, so I love to eat, and I eat a lot, so I’m just cutting back so I won’t feel as hungry for my time overseas. Emotionally, I’m just getting over the plane ride, everything else is going to be okay, I’ve got friends going with me, so I can get by. In checked-baggage, I’m bringing clothes, bathroom essentials, a journal, things like that, nothing too special. In my carry-on, I’m bringing my electronics( phone, laptop, iPad, etc.) with me. I don’t plan on spending much time inside while overseas, so I’m not bringing too much with me, and because I want to have room for souvenirs. My process as I prepare to leave is to plan for the worst, and hope for the best. Plan for a torrential downfall the entirety of my trip, but hope I get meet someone that plays for the National Soccer Team of Belgium(can’t hurt to hope).

One thought going through my head right now is, what if something happens? What if I get sick while abroad? What is a financial collapse happens in Europe? All the things that could go wrong are going through my mind as we speak. I know the likelihood of something bad happening are low, but thats why I prepare for the worst, and bring back-ups of everything, all insurance cards, birth certificates, debit cards, everything that I can to help me not worry, even though I still will. Money is always a worrying factor too. I know I have enough while overseas, but its just a worry, especially since we weren’t dealing with US Dollars, which is a worrying thought. I think of my family and friends, and I know I’ll miss them, but they know that this is something I want to do and that I’ll have the time of my life while I’m there, so they are very encouraging, even though they are worried about me. My thoughts are 95% focused on my destination. The semi-language barrier, the Euro, the food, the travel, the weather, and even the sights in Belgium, London, and Paris. Its going to be amazing, but I’m not home, I’m not in the United States. I won’t have the same freedoms as I would here. Belgium people will look at me, like the US citizens look at tourists here, like they don’t belong. My general feelings about going abroad are 90% excitement, and 10% worrying. I’m excited about going and seeing another part of the world, but worried about everything there..but that is normal I guess. I’m dealing with my whirlwind of emotions by thinking about the good things I’ll be doing there and all the friends that will be there with me. All the fun I’ll be having while I’m in Belgium, all the foods I can try, everything. Just looking at the positives of the trip seem to outweigh my worries.

Studying abroad, I hope to gain a lot of insights on how non-Americans live. I know Europe is generally US-like, in terms of laws, etc., but I want to see how it is from the outside looking in. Whats it feel like, smell like, look like? Pictures are worth a thousand words, but it will never be the same as actually being there, and I want to experience that first-hand. I’d like to see all the landmarks in Belgium, London, and Paris. I also hope to learn more on how the politics work in these other countries, and maybe, just maybe, I’ll be able to see William and Kate…or I could see David Cameron, or the Queen! That would be awesome, I could take a selfie with the queen…which I would post here! I want to see Big Ben, the Eifel Tower, the Lourve(Louve)…The glass triangle thing in Paris. I want to see Buckingham Palace, Stonehenge, anything like that. I want to experience night-life in London. I’m pretty nervous about night life in Paris, because they’ll rob me, which is something I don’t want, but I’ve seen a lot of Youtube videos about the London night-life, and it looks really fun! All these things I want to see and experience will help broaden my, up to this point, closed-off view of the world,  by that, I mean my American-only view. It’ll be nice to see what its like as a European.

All in all, I can’t wait for this trip. Its going to be a once-in-a-lifetime experience! I’ve got some more packing to do…next week:) And I’ll post again then! 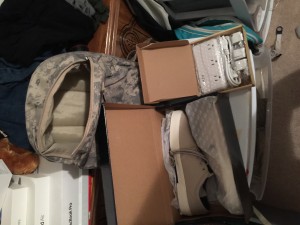