Soo… about this metric system 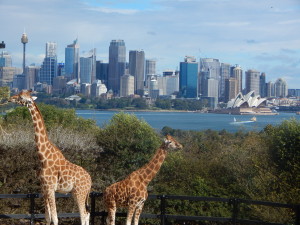 I’m shocked to say I’m two weeks into my adventure in the ‘land down under’. Time has absolutely flown by. The US and Australia have so many similarities, but the differences, where they’re present, are extremely apparent. One of the first things I noticed was that “your welcome” isn’t said. For example, “cheers” or “sure thing” are the most common responses I’ve received to a thank you. The quirky phrases are definitely a charm to hear, however there are some things that aren’t common in Australia. One of the professors assisting in a course I’m taking went out with all of us to dinner one of the first nights and we had to explain the concept of “cooties”. Another fun miscommunication occurred last weekend when some of the group visited Sydney. We had decided to go on a whale watching tour and the woman at the ticket kiosk needed an email address. Well, my email address has a period in it as a space between my first and last name – a pretty common email addition. As I was telling her my email, she immediately stopped and looked at me when I said ‘period’ and started typing the word. As I explained it to her, she admitted that she had never heard that before.

The biggest difference – and hardest adjustments – result directly from the STRONG English influence still apparent in Australia. Kilometers and measuring gas in liters makes me pointlessly attempt to convert between the metric system and the US system. Since everyone here drives on the wrong side of the road and from the wrong side of the car, I’ve both tried to get into the drivers seat (by mistake) as well as almost getting hit by a few cars and buses. The Australian dollar system adopted their coinage system from England as well. While the US has $1 bills and no coins over $0.25, Australia has $1 coins (which are really small), $2 coins (which are even smaller – dime sized), and a $0.50 piece (which is ironically bigger than any coin I’ve ever seen). Our professor has told us to be careful not to fall off of boats – all the coins in your pocket will drag you to the bottom and you’ll drown.

All of the girls on the trip got together and traveled to Sydney last weekend. Outside of the 3 hour bus ride each way and that our hostel was further away from everything than we would have hoped, it was an amazing trip. We were able to go to a small zoo right off of Darling Harbour as well as the large Taronga Zoo looks over the sights of Sydney Harbour. We went whale watching, took selfies in front of the Sydney Opera House and went into an observation tower to see the city at night. We’re planning another trip this weekend to Melbourne and a possible trip to either Uluru (the iconic Ayers Rock) or Cairns (the Great Barrier Reef) right before heading back to the states.