A Weekend in Paris

Paris, a city known for its romantic atmosphere, stunning architecture, extravagant churches, extensive art collections, aaaaaand rude locals. When traveling to cities in foreign countries, I travel with an open mind. I have always been excited to see a new country and witness new cultures and take in all it has to offer. Paris, on the other hand, I expected to be absolutely awful. Right before we left I was convinced that it was going to be my least favorite city that I had ever visited. I could not have been more wrong. Yes, there were a few rude Parisians at the places we ate at, but more so than not, they were just like the people of any other big city. It is widely thought that Parisians do not like to speak English, and are almost offended when you try to speak to them. I found, that if you started with a, “Bonjour, parlez-vous Anglais,” rather than just a, “hello,” They were much nicer because you did not start the conversation off expecting them to speak English. It could also be said that our expectation of them to speak English is highly unfair. After all, the average American only knows one language. Meanwhile, the average French person speaks around 2 languages. We tend to not even have menus at restaurants in other languages, while every restaurant we walked by in Paris had menus in 4-5 languages. That seems very hospitable to foreigners if you ask me. So, maybe, we could learn a thing or two from Parisians. There will always be rude people in every society, Paris gets a bad reputation for theirs. Personally, my experience in Paris could not have been better. I would highly recommend travel there to anyone who is thinking of going, and can’t wait to go back one day myself. 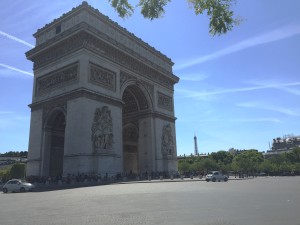