I just wanted to use this first blog to introduce what my trip was all about and add a couple details about our first days abroad. For almost the entire month of May, I went on a faculty-led study abroad trip with the University of Alabama for Data Analytics and International Supply Chain. The trip lasted twenty days in total, from May 5th to May 25th. For the first 10 days, we were in Dublin, Ireland where we explored the city and had classes on data analytics at University College Dublin. For the second leg of the trip, we traveled to Istanbul, Turkey. In Turkey, we focused more on the supply chain aspect of the trip by going on multiple plant and company visits. I am goin 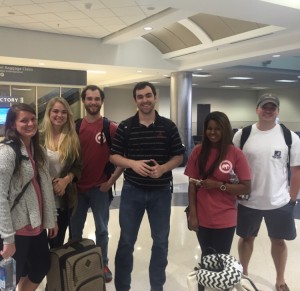 g to try to use this blog to be able to share my amazing experience. Although we still had class assignments and deadlines, we managed to fit in a lot of fun into our busy schedules. All in all, it was one of the best experiences I have had so far. I have made many friendships and inside jokes with people that I may have never met before. I got to explore landmarks and find local treasures in the two great cities. Then, I learned the value of being knowledgeable of international cultures, especially from the business point of view. I would say that this trip opened up my eyes to more possibilities I could have in my career. I would definitely recommend studying abroad to any student who wants to travel the world and get class credit at the same time! You will learn a lot and you will not regret it. 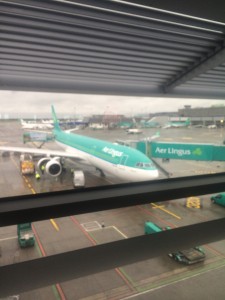 Unfortunately, you lose a little time when you travel the world. So the official first day of the trip was just the fun adventure of a group of four of us walking through airports and enduring long layovers. My flight left Birmingham, Alabama for Atlanta, Georgia around 4 p.m. We got to Atlanta at about 8:30 that night and then left for our 6-7 hour flight to Dublin, Ireland. So basically, the first day ended with us all trying to get some sleep on a cold plane. Nineteen more days to go.

Actually, the morning we got to Dublin was more comfortable than you would think. I woke up on the plane with about an hour and a half to go. Although the time change made me think it was only 2 in the morning, it was more like 8. An attendant greeted me with some tea and so I just curled up and watched Breakfast at Tiffany’s. Not too shabby if you ask me. We landed in Dublin at 9 that morning and our instructor met us all to take us to the hotel. We all got on a shuttle and drove to the hotel. Our teacher gave us some free time until dinner to freshen up and relax from all the jet lag. A couple of us decided to go out and explore so we went to exchange our money and went to the shopping center near the hotel. We still had a little time before we had to be back for dinner, so traditionally, we went into our first Irish pub. We hung out there for about 45 minutes before we went back to the hotel to get on the bus for dinner. For dinner, we actually went to an Italian restaurant called Toscana near the coast. The food was amazing and the view was better. It was colder outside than any of us anticipated, but it was still beautiful. We ate dinner and then headed back to the hotel to have a calm night of sleep before we got busy on our first true day of the trip.

Today started our actual first full day filled with Irish activities. We ate breakfast at the hotel, which was definitely one of the best hotel breakfasts I have had. Then, we had to meet in the lobby around 8 in the morning so that we could get on a bus to go tour the college that was hosting us: University College Dublin. Our little shuttle bus took us to campus where we got a tour of the buildings. It was a beautiful campus. It was a lot more modern looking than our main campus in Tuscaloosa, that’s for sure. We got to see their equivalent of the Ferg and their rec center. All of it was really impressive. Had I thought about college in an international country, it would have been a top choice! Even their visitor center was really cool. We had a little introduction to our course there (coffee and tea included since the jet lag was still a real struggle). After that we headed to the science building where we ate lunch in one of their cafeterias, the Pi cafeteria. I actually think it gave Fresh Foods a run for their money. 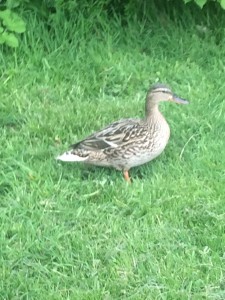 Duck of the Irish 🙂 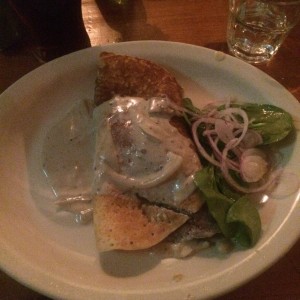 The Boxty Pancake… made of potatos of course!

After that we left the college and headed to City Center, or the downtown of Dublin. At the steps of city hall, we met a very stereotypical looking Irish man who gave us a really entertaining tour. The whole time we walked, he carried around a hurling stick. Hurling is one of the national sports, along with Gaelic football. He took us to a cool, hidden park where he taught us all some hurling moves. He taught us a lot about the culture and history of the country, including the devastations of the Protestant Reformation and the blight. We walked into and saw many Irish landmarks, like St. Patrick’s Cathedral, Christ’s Cathedral, the Dublin Castle, Trinity College and Four Courts (their court system that is actually only three courts now). Our tour guide even taught us some of the local songs, which we proceeded to sing the rest of the trip.. even in Turkey. Ironically enough, one just came on my iPod. It’s called “Finnegan’s Wake.” Check it out here if you’re interested: https://geo.itunes.apple.com/us/album/tim-finnegans-wake/id192795236?i=192795688&app=music The actual song that he taught us is called “Molly Malone.” There are a lot of versions of it. I think the one I downloaded is by The Dubliners. Anyway, if you want to sample some classic Irish pub music, those are some good ones. I’ll be sure to list more in later posts. After the walking tour, we went to a restaurant called The Boxty, which is famous for its boxty pancakes. Being in Ireland, they were of course pancakes made out of potatoes. They were actually really good. It is not something that I would have thought if I heard it. From there 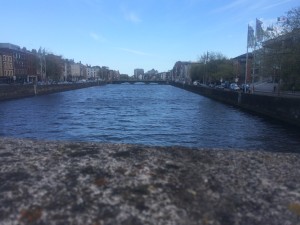 , a lot of us actually stayed at the City Center and visited a couple tourist pubs to get our pint for the night. Navigating the bus system to get home later was definitely an adventure. At one point, we got off at the wrong stop and had to run to the next bus, but I had a blast making memories with the people that were literally strangers two nights before.

Today was our official first day of class, in an actual classroom at UCD. We woke up a little early so that we could be in class by nine. The jet lag was still not my best friend, but we made it. We got to our classroom and immediately started learning about data analytics and the big role they play. We learned to navigate our first data tool of the trip, called Tableau Public. I actually really enjoyed it. It is really visual in its design, and although it was tricky at first, I got the hang of it. We ate lunch in the Pi cafeteria again and then finished in the early afternoon. For supposedly a day of class, it only felt like an hour tops. Everything and everybody was so relaxed, which made it go by like it was nothing. After that, we left to go back to the City Center, where Dr. Keskin let us go shopping for a little while at a department store that is very popular in Europe, and also the direct customers of a textile plant we were visiting in Turkey. From there, we went to our “Welcome Dinner” at the Brazen Head Pub, which is actually the oldest 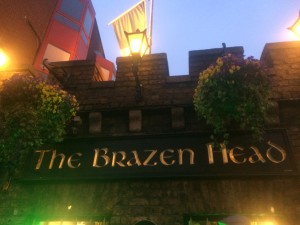 pub in Ireland. This was actually one of my favorite nights in Dublin because we got to hear folklore and Irish legends about fairies. It was basically a lot of stories surrounded around the history of the potato, but the storyteller was awesome. We also listened to more Irish music like “Whiskey in the Jar” and “Wild Rover.” Those two might be my favorites. All in all, it was a great night in Ireland.