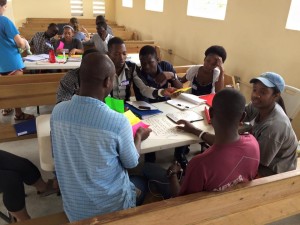 My second trip to Haiti was as impactful and meaningful as the first, and it has everything to do with the people that we met and discussed with all week long. We started the week assessing the personalities and interests of the people we had in class. Every class participant took a personality assessment, which we used to put everyone into smaller groups for the rest of the week. Putting each participant in a group based on their assessment ended up working out very well all week, as it cultivated lots of critical discussion and brainstorming.

As we surveyed and went through a variety of business fundamental topics, from economics to operations to management to entrepreneurship and more, lots of valuable discussion happened. The structure of our class each day centered around a brief introduction to whatever topic was being discussed, followed by a group activity to foster discussion and teamwork. Most of the activities we used involved hands-on building or coming up with something to present. One particularly valuable activity was giving each group a random handful of Legos and asking them to build a tower structure. Every couple of minutes we would add a catch or restriction. They started only able to use one hand and not being able to talk to their other team members. Then they couldn’t use a certain color of block to build their tower. Each restriction had a specific takeaway that could be applied to ramifications of such a problem in a small business setting, and it was really cool to see the wheels turning in the minds of each class participant.

The second half of the week was focused on generating an idea/concept for a small business in the Haiti community, and we worked in their small groups all week to flesh out the ideas and develop business plans for those ideas to serve as frameworks for possible small business creation in the future for the communities. Overall, the week was filled with valuable critical thinking and discussion that was very exciting to be a part of!