While in Haiti… Love Rice and Beans 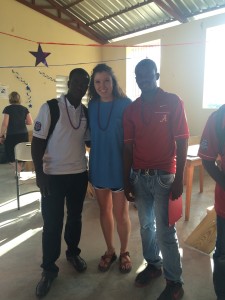 As I describe the experiences we are having in Haiti, I first off want to encourage everyone that thinks about flying Spirit airlines, to simply save up extra money to purchase tickets through another airlines. Our first day of travel turned out to be a rather long day due to hours of long delays by the airlines. Our group closed down the Fort Lauderdale airport being the last flight to arrive, and our group opened the airport up at 5 am being one of the first flights to depart.
By the time we get in to Haiti, there was a series of document exchange to get into the country. They handed us several documents to keep up with throughout the week, and if we lost them, we could not leave the country. I knew this was going to be a problem for me, so I was clever enough to stow these important documents in a folder (more on this conundrum in the next blog post). Even though we are all very tired, we make it through the airport and begin our journey to the compound. The bus ride to the compound takes us through the city of Port Au Prince, the capital city. The ride was such a cultural awakening. I saw many things that amazed me, but some of the most notable was the ladies carrying large buckets of water on their heads without holding on to the buckets. Another astounding sight was houses that no one was living in; noting that the country has still not recovered from the earthquake years ago.
The compound is about 30 miles outside of Port Au Prince set at the valley of nearby mountains, and the location is beautiful. The compound included several rooms for bunk beds, a kitchen area, shower rooms, a dentist clinic, and a doctor clinic. Right beside the compound is a church where we taught our lessons. The first day of teaching, we met the class, a group of +/- 25 Haitian students. We had a doctor, several teachers and students, a principal, a construction builder, and several wanting to start their own small businesses who comprised the class. The first day and a half we completed personality and strength tests by having students do fun activities to test their communication skills. We had several barriers while teaching the class. The first barrier was with language as most of the class speaks Creole and not English. Luckily, two of the UA students in our group speak Creole.. Not necessarily a barrier, but an interesting distraction, was the baby goats that were playing right outside the church.

At the end of the end of the day, we went to play with the orphan kids located next to the compound. Our student group immediately reverted back to childhood stage as we were playing hide and seek, climbing slides, swinging on swings, and shooting hoops with the orphan kids. After playtime, we had traditional Haitian dinners of fried plantains, macaroni with chicken, and island coleslaw. Some evenings, we would shoot hoops, or jump in to soccer games with the local village men before dinner. Around the compound was two local villages, we walked to one village in the evening, and the farther one we walked to in the morning. Walking to the villages was an eye opening experience… the walks exposed us to how poor the people really are there. Even though the village people were struggling to survive, there was no need to feel sorry for them because they are happier than most Americans. I was amazed that the Haitian people were so happy, genuine, and loving despite their struggles with poverty and harsh living conditions.