I’m not going to lie, the fact that English is the main language spoken in Australia, was a major reason for why I chose to study here. I took 3 years of honors Spanish in high school and still can’t put a sentence together, so I wanted to avoid the frustration of constantly being surrounded by a language I don’t understand. One of the first things I learned when I got to Australia was that English is NOT the same everywhere. Australians have a way of shortening words and turning them into something completely new. It took me a few weeks to get used to all of the slang here, but I must say, once you pick up on it, speaking “Australian” is actually quite fun! (p.s. yes I know Australian is not a language, but you get the point)

So without further ado, here is a quick guide for some of my favorite Australian sayings and words:

mate – friend (commonly referred to as “m8” in texts)

goon – boxed wine (aka the only alcohol uni students can afford, but it tastes awful)

heaps – a lot (there are heaps of spiders in Australia)

She’ll be right – everything will be fine, it will work out

cheers – cheers, thanks, goodbye (this is used in so many different ways – I once held the door open for someone and they said this to me instead of “thank you”)

And because its so representative of the Australian lifestyle, my favorite saying of them all:

Okay, so maybe some of these aren’t all that complicated, but imagine this:

“Earlier this arvo I was keen for some goon, so I grabbed my sunnies and went to the bottle-o where I ran into my mate who told me about the slater he found in his brekkie this morning. I defo got a laugh outta that one but on the way back to uni my thongs gave me a blister. She’ll be right though.”

I think you get the point, and if not, no worries mate, you’ll catch on eventually – I did. 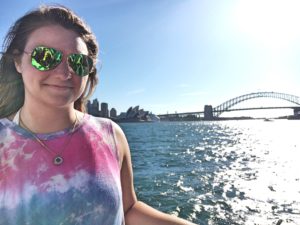