My Demography Was Not My Destination 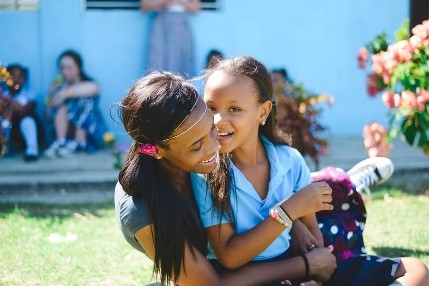 It all started in March of 2015. It was my first time going through customs, a word I always heard about but never thought I would get to experience. It was my first time on a plane, a vehicle of transportation I never thought I would get to ride in. It was my first time going out of the country, the other side of the world I never thought I would see. It was simply my first time. It was my first mission trip and it was to the Dominican Republic.  I was blessed with the opportunity to travel with a team of 25 passion filled college students, from Auburn, AL. to serve the men, woman, and children of the Dominican Republic. Upon my departure back to the U.S., I cried tears of joy, hope, and purpose. Because if you know me, then you know that college should not have been in the picture for my life, let alone at the University of Alabama. My two sisters and I were raised by my single mother, who was the kind of woman that had to express her love for us through her constant efforts of making sure my sisters and I had just what we needed to survive. We grew up in a three bedroom trailer, eating ramen noodles, going some nights without gas, water, and electricity. After going to the Dominican Republic in March of 2015, my heart was moved in an unexplained way because I saw myself, my life at a young age, in their eyes. I was invited back to the same mission field in October of 2015. My life was changed and my spirit was filled with a purpose that I could not quite understand. I knew that my calling was bigger than myself. Because in that same time frame, I changed my major from Nursing to Social Work (kind of bold uh?). None of it made sense but it felt right and the inner peace I had about where I was going gave me assurance that I would be okay. So, I guess you can see where my inspiration for going to third world countries came from.

I will be traveling abroad with the school of social work, May 8, 2016, to do and see the work of social services in Cuernavaca, Mexico. To be completely honest, I had no intentions of going on this trip. I had heard about it but because of my financial circumstances, I did not think I would be able to go. So I simply shut the door on the opportunity. Well, at the end of March this opportunity presented itself again and because of the reoccurring events that took place, I could not pass this opportunity by. After holding fast to my faith, my finances began to line up (which was the biggest barrier from the beginning). People began donating towards this trip and I received scholarships that would assist me on this trip. Going abroad to change lives is a gift that I believe I have been given so going to a foreign country out of fear was never the concern.

It is now April 30, 2016, and I am currently preparing to leave for this trip. Through my time of preparation, I have done many things to equip me for the challenges that are awaiting me, as well as the adventure that waits. I have changed up my eating habits and I have consumed way more water. I have cut out sweets and added more healthy colors in to my diet (fruits and veggies). I have mentally pulled back from social media over the last month. I believe it is essentially important to pull away from what you are accustomed too, when studying or working in another country, because life is simply not the same there as it is here. In addition, I have cut out music and television to mentally prepare my mind for the life I will be living while abroad. This is also a transition season for me, as I have finals and I am a resident adviser on campus, so I have residents to check out, all while leaving two days after finals are over. So as you can see pulling away has been ultimately healthy for me in mind, body, and spirit.

To many, studying abroad is, without question, an exciting adventure that can lead to a variety of emotions and feelings. Being that I have been abroad twice, and seen a side of the world I did not know existed, this is actually a pretty exciting time for me. As I stated above, I feel in my heart that I have been called to a lifestyle of changing the world abroad, which will ultimately change the world I live in here in the U.S.. I am excited because I am a firm believer in growth and stepping out in to the unknown, even when you have no idea what it is your saying yes too. However, with that excitement does come a little anxiety. I understand that the Dominican Republic and Mexico are two different places and it would be silly of me to think that my experiences there are going to be my experiences in Mexico. That’s just not realistic. So yes, I am a little scared. Growth and stretching is bound to take place and it is something that none of us can run from. There will be an intense language barrier. There will be walking 20 minutes to class. And it will indeed be hot. But the amazing thing about knowing what I know now is that when I get there, I will be open to what I am to face.

Studying abroad to Mexico is truly broadening my horizons. My territories will be expanded and yet again, I will learn something about myself that I did not know existed. Opportunities will rise and doors will be open. So what are my expectations? Truthfully, I do not have any and here is why. On my very first trip out of the country and on a plane, I had all these ideas and expectations of how things would go. Upon arriving to the airport, I was excited. Yet, because it was my first time on a plane, no one had informed me that I needed to put my toiletries in my suit case. Not knowing that led me to having to pay $150.00 so that I could keep the things that I needed in my carry on. In addition, no one warned me to dress comfortably because I could either fall or have to run so that I won’t miss my flight (yes I did fall and yes I did miss my flight). And no one warned me that if I missed my flight, I had to spend the night in the airport, on my birthday. So I guess you can see why I have no expectations because life doesn’t always go the way that we expect it too.

I am truly excited and I am overwhelmed with joy about this trip because I know that where I am going in life, I have to learn something for the destination, from Mexico. I hope to learn more about different cultures and I plan to expand my knowledge of the Spanish language. My poverty was the very thing I thought would disqualify me of having purpose on this earth but in turn, it has been the very thing that has been used to show me that regardless of my background, my demography is not my destination.