Nicaragua is very different from Alabama. I was very aware of this before the trip but seeing all of the differences in person made them so much more real to me. The moment I stepped off the plane everything switched to Spanish. I knew it was going to happen but it was still very jolting. In the following days, nearly everyone I met while working in the clinic and maneuvering around Granada spoke only Spanish. The sound was very different from the heavily American accented Spanish I was used to hearing in classrooms in the United States. It was much faster, people tended to not enunciate, and often times the ‘s’ was completely dropped from the word. I still haven’t quite managed to adjust to all of this completely but I have picked up on some Nicaraguan slang. For example “tuanis” means “cool” or “neat”.

The city of Granada itself is very beautiful with colonial style architecture and bright colors. The host family I am staying with lives in a nice yellow city home with a large open courtyard in the middle. A lot of the city homes here are laid out this way so hallways and living rooms are mostly open to the elements. This allows a breeze to pass through and cool the house a little. Air conditioning is not at all common in Nicaragua so this is a very useful arrangement. 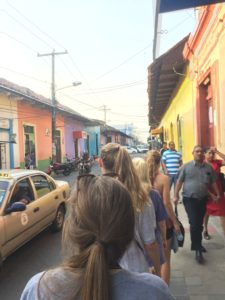 The coolest I’ve felt while in Nicaragua was when I was swimming in the Laguna Apoyo one of our excursions. This body of water formed in the crater of an extinct volcano located between the volcanoes Masaya and Mombacho. The water was clear and clean while the green slopes of the crater rising up around me were absolutely gorgeous. Another cool and beautiful place was the top of Mombacho. From this vantage point you can see down into the lagoon as well as out across Lake Nicaragua. While hiking up Mombacho we had the opportunity to learn a lot about different plants and animals that can be found in the forest on the volcano. For example we were shown plants that smell exactly like lemons, plants that can be crushed to keep mosquitoes away, ferns with spikes coated in formic acid, and many other fascinating organisms. 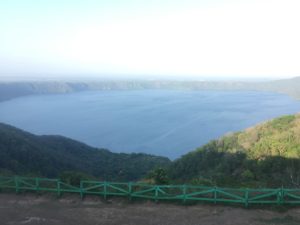 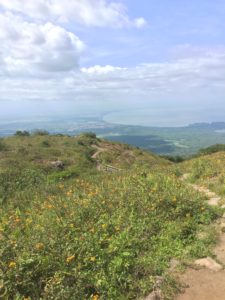 (Right) – View of Lake Nicaragua from top of Mombacho

With all of the incredible things I’ve seen during my time in Nicaragua its hard to accept that my time here is almost at its end.