How to Prepare for Air Travel

What is currently happening: writing a blog post after a transfer from the domestic terminal to the international terminal (with lots of confusion and frustration between those two), and sitting at the gate of a plane that will hopefully arrive on time but that I’m not even positive I will be able to get a seat on.

Weather is tricky. Air travel is tricky. Most of the people on my trip have not had any problems. But here I am sitting on the floor next to a wall outlet after being at the airport for seven hours in hopes that I can get a seat on a plane to join my classmates tomorrow.

And all of this sounds like a nightmare, but it’s not. Little did I know that my Study Abroad adventure wouldn’t start in Ireland but in Atlanta, at the airport.

It turns out that a lot of free time means that you can meet a lot of people.

I met a man in the Missed Connections line for our Charlotte flight who is from Ireland originally but lives in Missouri and is travelling to Detroit for his daughter’s wedding rehearsal.

I met the pilot of my would-have-been plane whose daughter is studying the same major as I am.

I met a woman from Russia working at an airline desk who, even though I was absolutely at the wrong place and my problem was wholly out of her control and out of her department, got on her personal cellphone and called her friend who works at another airline to try to get me on the right plane. We shared the same middle name.

So, my first piece of advice to any people looking at or doing Study Abroad in the future: thunderstorms sweep through, planes get cancelled, terminals get changed, but don’t let that get you down. The Study Abroad adventure starts at the airport, a massive and sprawling hub of people coming from and going to their own adventures, even if that is just a business trip or a trip home.

In light of that, then, here is how to prepare for your Study Abroad air travel: get to the airport early, wear shoes in which you can walk through miles of terminal hallways, download any mobile apps that your airline offers (these really help!), bring a jacket that can also be converted into a pillow in desperate situations, ask questions of the travellers sitting next to you at the gate, don’t be afraid to ask for help from the employees of the airport, don’t let frustration get to you, and be kind to all.

All will be kind in return. 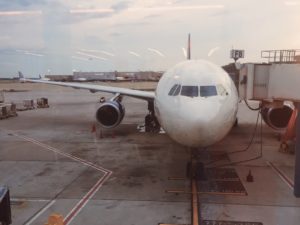