In just three short days I will be departing from my small PA suburb to fly to Sydney, Australia. Over a year ago as I spent hours researching which programs I was interested in, I came across this internship program in Sydney. And I laughed because it seemed outrageous that someone like me would end up in Australia. Europe, maybe. But not Australia. But sure enough, here I am. About to leave for 8 weeks in the land down under. I chose Australia because it was the furthest thing from my comfort zone. A 14-hour time difference from Philadelphia only adds to that. I also knew that it was not an easily accessible location and as I grow older and want to travel, locations closer (such as Europe) will be more attainable. And while I would be giving up ‘summer’ (it is winter in Australia this time of year) I knew that the weather would not inhibit any of the things I wanted to do.

The two weeks before my departure date I spent in rural Alabama participating in the University Fellows Experience’s Black Belt Experience as a student leader. A lot of the prep I had to do (such as securing passports, visas, packing, flight info, interviews) had to be completed way in advance since my ability to do some of those things would be limited. A lot of tasks I had to delegate to my parents if they needed to be done right before the departure date. For example, my dad was in charge of researching phone and data plans. My mom was in charge of adapter outlets.

And while all this planning was going on, there was a lot of emotional prep going on behind the scenes. It was easy to get caught up in something that I could write on a to-do list, a piece of paper. What wasn’t easy was preparing to say goodbye to my sister as a high schooler while knowing that when I come back she will be a high school graduate. What wasn’t easy was mentally preparing myself for only a week with my family during the entire summer. There wasn’t a checklist for any emotional prep that I had to do like how to deal with homesickness or being sick abroad.

I have two suitcases full of clothes for both working, studying and adventuring but stuffed in between pairs of shoes and jackets and alabama tshirts I have pictures of my family and friends to hang in my apartment just like I would do in Tuscaloosa.

In these next 3 days, I’m sure every emotion in the world will be running through my body but for the first time in six months since I was accepted, this experience finally feels real. So I think I’ll stick to that feeling for now. 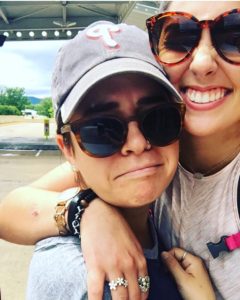