The Middle of the Chapter: China

Whenever I told anyone I was going to China, I always got a similar reaction from everyone, “why there?” Everyone assumes that China is not a place to travel to, that it’s dirty and the people don’t know English, so why even go there. But I knew never to judge a place unless you’ve been there, and my first impression of the country was great! They really tried to keep everything clean and pretty. In the city I stayed in, they had flowers alongside all the roads and they would water them each day and make sure things looked nice. In my head I kept thinking how wrong people are when they think of China. While there are some setbacks and maybe not everything was like it was in America, it was still beautiful and the culture was amazing. I felt very welcomed there, more so sometimes than America. In America many people are so wrapped up in their own lives they just don’t care about others much, while in China, everyone was always happy to help and become friends with the “Americans.” When first arriving it was surprising to be almost famous there. We would always catch people taking pictures of us and sometimes people would even ask to take pictures with our group. These types of situations happened a lot, but we soon got used to it and had fun with it by posing for the pictures and joking around. When we landed in China and got to our city it was very late at night, the next morning though we got up to get a tour of the campus. The first picture I took was at the library when a bunch of people posed for us when we were taking pictures. 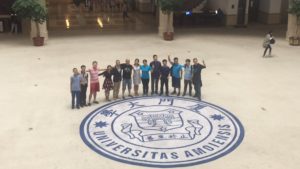 Many things that were different was the way people acted. It was interesting to notice how different the culture was than America, for example, in America many people don’t like to stare at others or they yell at their children to stop staring or not to interact with others. While in China, everyone stares at you and it doesn’t matter, no one cares, also they always were pushing their kids to talk to other people, especially us, so they could practice their English. Many other things were different, but in the end I think a lot of the different things I learned, were in a way, better than the way America does it. One thing that was different for the worse was the internet. The first thing I noticed was how slow and sketchy the internet was. Also many things are blocked so you have to use a VPN to use any sort of social media, but that slows down the internet even more so. In the end, my first impressions of China were great and I am so far happy that I came here.