I am in the throngs of my China trip and, miraculously, nothing terrible has happened. No earthquakes, no kidnappings, no allergic reaction, I began to feel like I was on top of the world! The fact that I stared my anxiety down in the face and came on this trip was exhilarating, but that didn’t mean I didn’t have a few anxiety attacks throughout the trip, but instead of running home to a comforting place when these attacks occurred, I stayed out and learned to calm myself down. Forcing myself to stay out truly showed me all that I had missed when dealing with anxiety. Instead of turning my friends down when they wanted me to go out, I went out with people I had just met and had the time of my life.

China was a whirlwind of adventure and intrigue. Everything was so different, yet the same. Shopping, eating, and culture were all conflicting with what I grew up with… and I loved it. The craziest thing was the freedom. After class, my friends and I would just get on the bus and take an hour bus ride to the city where we would wander around and explore. One day, we stumbled upon a temple in the mountains of Xiamen. It was an eye opening experience. I saw people praying and burning incense, monks walking around aimlessly yet purposefully, and tourists gawking at the wonder of the ancient architecture and tradition. I took it as a moment to appreciate all that has happened for me to be here. I was overwhelmed with gratitude and awe. Somehow, my anxiety disappeared as I was constantly kept busy. If I was asked to go out, I would say yes and go with some members of my group and we would go on an adventure. Half the time we didn’t know where exactly we were going and even less of the time, we didn’t know what to expect. But, surprisingly, that didn’t scare me at all. Every day I was taking a new step into the unknown and that just boosted my confidence for the next day. From trying a new restaurant to playing a virtual reality game downtown, I was learning to be my own person without being held back by fear of failure or making a mistake. When it was time to leave Xiamen, I was ready and excited to go to the big cities of Shanghai and Beijing.

Shanghai was truly an international business city. It was booming with elements of European occupation during the early 1900s as well as old temples contrasting the modern skyline. We visited shops and I learned to bargain with the locals to attempt to get the best price. It was so fun to be a tourist, but also have that aspect of learning the language and seeing the excitement on the locals faces when you respond in Chinese. Beijing was amazing and full of ancient history (which, being a history major, I couldn’t get enough of). From Tiananmen Square to the Forbidden City, the aura of history surrounded us. As we walked the ancient stone steps and climbed the worn-down stairs of the Great Wall of China, it was a surreal experience. The next day, we closed our trip with the Temple of Heaven and walked around a beautiful community park. It was the perfect last day to end my trip in China. 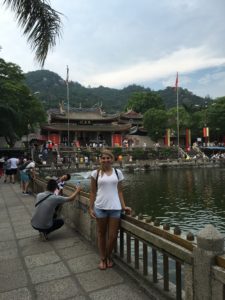