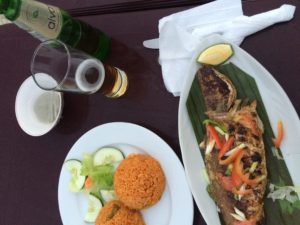 One of the things you’ll find that you’ll miss the most from home about studying abroad will probably be eating your favorite foods. This problem also happens when you come back to your home country, and you’ll find that you miss foods that you had abroad as well! For me, the drink I’ll probably miss the most from Ghana is Alvaro, and the food I’ll miss most will be Red Red (which is a sort of spicy red bean stew eaten with fried plantains).

Eating abroad you’ll learn how the staple foods of other countries are different from your own. For example, in Ghana and many other countries, people eat a lot more rice than they do in the USA. When I studied abroad in Peru, we had rice and potatoes at every meal!

In many countries there is no access to clean drinking water, so you may be drinking out of water bottles the whole time! Ice in your drinks is also something that may not be common, having warm water is something I definitely had to get used to!

The location of the country will also depend on the types of food you get to eat. Most countries on the coast eat a lot more seafood than I’m used to, I found myself eating fish multiple times a week, when in the US I only had fish a few times a month. Since Elmina, Ghana is right on the coast, I’ve had the chance to try many new varieties of fish and other seafood such as octopus!

The local fruit is something you’ll need to try when you study abroad. Because it is often grown in the country you are in, it’s much better any imported fruit. The mangos and pineapple in the US don’t even compare to those in Africa! I’ve also tried starfruit and papaya, two fruits I’ve never had before.

Trying other types of new local foods can be fun as well, I’ve eaten snails, jolloff rice, Guinea fowl, and spicy drinks made of hibiscus flowers! I’ve also had Tigernut pudding, fufu, banku, white yams, and lots of plantains. Many of these foods are ones I never would have had the opportunity to try in America! Many local foods are very spicy, which is a stark contrast to the salty foods we eat in America.

One thing I’ve learned about the nutrition in other countries is that they are taught very differently than we are. Here in Ghana, people are taught about the 3 main food groups, which includes thing such as “protective foods (GLOW foods)” and “energy-giving foods”. The GLOW foods include fruits and vegetables, and locals are taught to have a 1/3rd of each food group on their plate.

Here all of the food is fortified with vitamins and minerals, in an effort to combat malnutrition, a very big health issue in Ghana. Children especially are given Vitamin A supplements, a common deficiency in the diets of Africans. Another large problem is a lack of protein in children, causing Kwashikor in which the hair turns reddish and falls out, and the child’s stomach becomes swollen.

Another problem with nutrition is that the diets of many Africans is becoming more westernized, meaning obesity and diabetes has become a problem in addition to malnutrition and starvation. The introduction of fast food may have contributed to this problem.

One interesting thing about fast food abroad is that the fast food chains we see in the US are altered to fit the preferences of those in other countries. I went to a KFC for the first time in Kumasi, Ghana and they sold Jolloff rice. The chicken was also very spicy, something I learned was not the norm for KFC. In Peru, the McDonald’s sold fried Guinea pig big macs. This shows how fast food chains are slowly introducing American foods into the diets of other countries!

No matter where you study abroad, trying new foods is part of the experience! I definitely recommend branching out from your normal foods and eating new things, I’ve found lots of new things I’m excited to try to make at home. One of these foods is Bofrot, a type of Ghanaian doughnut, that may become of my favorites. I’ll definitely be attempting to make that when I get back to Tuscaloosa!