While studying abroad in Ethiopia I was able to meet hundreds of Ethiopians as my team and I set up medical clinics in the locals’ villages. The people were very welcoming and happy to see us. Some would stare in amazement at the color of our skin because they had never before seen such a pale skin color before. Others were amazed at the length and color of our hair. Many Ethiopians have very very short hair–including the girls. Having long red hair myself was just hilarious to them! I enjoyed watching their beautiful faces fill with a huge smile as they rubbed my arm or touched my hair in awe. Some of the small children were actually terrified of us at first and cried because they had never seen a person with such light skin tone that we actually looked rather scary to them! Most of them came around to love us once we broke out the bubbles, balloons, beach ball, coloring pages, and nail polish. It was one of the most humbling and heartwarming experiences to watch their faces will with joy as we brought out something so simple as bubbles or a balloon.

The people of Ethiopia live in villages. We worked in the Gumuz Region where the people lived in little huts made out of mud, straw, and sticks. Most people in the region only owned the clothes on their backs–many of which were covered in holes. Only about half the people I encountered owned a pair of shoes. Those that did own a pair were so worn out that here in America anyone would have easily throw the shoes away without a second thought. The men work in the fields, and the women perform household chores such as cooking, washing, and boiling water so that it is suitable to drink. The locals are very grateful people. Nothing goes to waste and everything is used and reused until there is absolutely nothing left to be used.

One tradition I found very interesting is that the Ethiopians have coffee ceremonies very frequently. Coffee is very popular in Ethiopia because it grows on trees there. A women will grind the coffee beans using a pot and a stick, will roast the beans by making a fire, and will serve three rounds of different roasted coffee to a group of guests. The ceremony can last for hours. This is a way for them to sit together and talk everyday instead of being constantly on the go and grabbing a cup of Starbucks through the drive through as us Americans commonly do. 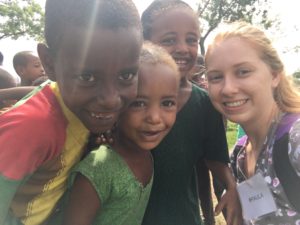