Hanging out at the airport: Berlin

While on my language program in Berlin, I spent one afternoon walking around the park, Tempelhofer Feld. This park is really special, because it’s actually an old airport used around the time of World War II. Originally used by Nazis, the airport was later the site of the famous Berlin Airlift. Today it’s simply a park. I was surprised at how many people flocked to the old runways and fields to grill and relax. I saw many people even wind surfing along the old tarmac. I myself decided to walk down the entire runway and it took about 30 minutes. This is one of the coolest and most unique locations in all of Berlin.

I think it’s so interesting how this city transforms its old historical sites into open spaces for people to interact. They’re not roped off as exhibits or artifacts, but rather they’re actively used by the people of the city. Another example is the “Mauerpark.” Literally translated “Wall Park,”Mauerpark was once a no-man’s-land part between the east and west sides of Berlin, but today people go there to enjoy the weekly flea market and outdoor karaoke. Studying abroad in Berlin has shown me how other cities in the world integrate their history in to their current daily life. 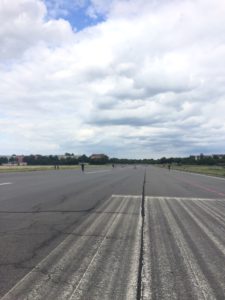 The old runway at Tempelhofer Feld