How to Come Home

Although I was heartbroken to leave Europe, after two months abroad I was excited to see my family and sleep in my own bed. That being said, my journey home was anything but easy. For a whole host of reasons, my relatively straightforward flight from Paris to Dallas ended up becoming a 45 hour endeavor that included 6 flights. By the time I was through, I was thoroughly exhausted and a well-seasoned flyer. And for the first few hours of touching down in Dallas, it was almost surreal that I was actually back home.

The most obvious change was the fact that the primary language I heard around me was English. While abroad, I became accustomed to not understanding all the conversations going on around me- which had the effect of insulating me from other people. If I wanted to understand a conversation, I had to put significant effort into picking up words and phrases. But the second I got on the plane from Dusseldorf to Atlanta, conversations around me became intelligible- which was not necessarily an uncomfortable change, but required a little bit of mental adjustment.

I also didn’t realize how strongly I associated brands with home, such as seeing someone holding a Starbucks cup, or passing by Chick Fil A in the Birmingham airport. The rush of comfort I experienced was a little off-putting (I never realized how much I would miss chicken sandwiches and waffle fries) but those brands represented memories of my life at home- Starbucks study sessions and freshman-year dining dollars spent on milkshakes.

After a few hours at home, I was settled and everything felt back to normal. Especially after a night of sleep, I began to feel like US Caroline again. I already missed my experiences abroad- not necessarily anything specific, but the knowledge that those times had passed and I wouldn’t experience them again made me a little sad.

I would definitely say that studying abroad changed my perspective on what it means to exist in a space as an outsider. I never moved or switched schools growing up, and I never had to live with a language barrier or in a culture radically different from my own. Living outside of my comfort zone for two months in places where I may or may not be accepted was completely new for me. There were people who got frustrated when I didn’t understand them- who spoke to me rudely, even though I was trying my best. I constantly had to be on my toes to make sure I wasn’t inadvertantly being rude or disrespectful, and I was always very self-conscious when I tried to speak to strangers in French. Although I think of myself as an inclusive person, these experiences helped give me context to the experiences of outsiders in spaces that I am included in.

Overall, I’m so grateful to have been able to study abroad to gain this perspective, as well as develop my French skills. I think that global citizenship is a hugely important soft skill, and that is something that this experience has helped me improve. 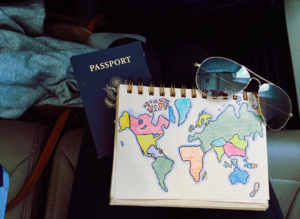