Packing in a Frenzy

In the utmost college student fashion, I procrastinated when it came to packing for my trip to France. You see, I stayed in Tuscaloosa until May 15th and I was leaving from Atlanta on May 21st. In my mind, I had about six days to fit in an entire summer before I left and had to fully immerse myself in school and french. So I drove from Ttown to Atlanta and spent six days doing basically nothing until Friday night when I became to completely panic because I had not even unpacked my bags from Tuscaloosa yet and I left the following day.

Packing for a trip within the United States is hard enough for me Now throw in the fact that I am traveling to a foreign country and have no idea how to not look like a tourist and the mission of packing becomes a thousand times harder. I am the epiphany of an athlete. I wear athletic clothes 99 percent of the time and only wear “normal clothes” when I am forced to. With that being said, I own like nothing, but athletic wear. In our first meeting for the program, our professor said specifically that the french do not casually wear athletic gear or even really shorts. My already stressed self (because I decided to procrastinate) had to run around like a chicken with its head cut off in order to have at least a  week’s worth of clothes that did not involve Nike shorts and t-shirts. This was not an easy task. I, legitimately, packed everything I owed that was not athletic related. I even had to borrow a couple pairs of jeans from my sisters because I only owned one pair. Of course, I was panicking even more about my wardrobe because all I’ve heard about traveling in France was that the French did not like tourist and especially american tourists. So I was frantically doing whatever I could to pack a very non american wardrobe. I’m fairly certain I failed at that, but oh well, I still was in Paris having the time of my life and studying a language that I loved.

All in all, packing was a the first crazy experience I had of my study abroad. Worrying about being respectful to the country I was traveling to, while also being comfortable was, honestly, a challenge. And I, definitely, learned my lesson about pushing all my packing to the night before. I would not not recommend that to anyone, but it’s okay because I MADE IT TO PARIS! Let the adventures begin! 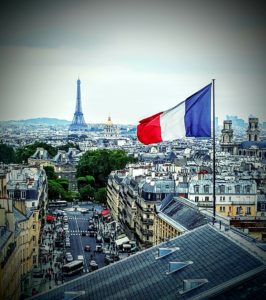