Thoughts and Feelings – When it was time to leave my host family, I woke up early and started off the morning packing then waited as the house came alive. I remember my host brother, Alex, coming in my room and saying, “You are one of the students that I will actually miss a lot, and I meant that.” I became very, very close with my host family… I think more so than other students. I didn’t really have too many friends because this study abroad experience for me was more focused on myself and finding me and who I am as a person rather than out partying with other American students. Anyways, I was feeling sad to leave and as I gave everyone hugs, my host mother said, “My son,” and then Alex was quick to say “No Mom, daughter” hahahah you would think after 4 months we wouldn’t have any more embarrassing language exchanges, but that always happens and has become one of my favorite parts of living with Spaniards 🙂 As the laughter settled down, we promised to stay in contact and I told them how much I loved them in Spanish (hopefully with no mess-ups!). I gave them a letter and then I gave Alex a book I had bought him in Paris when I visited at the beginning of the semester. I have included a picture of what I wrote to him in the book. Alex is learning French, so I thought it would be a nice gift for him and I kept it all semester and then gave it to him when I left. The best part was, he actually wrote something in a book for me, too! It was a John Grisham novel, The Pelican Brief, and he told me to finish it on the plane ride home. It was a very sweet moment and as you can see, I was extremely close with my family. Then it was time to go, and although I didn’t want to leave my family or the beautiful city of Barcelona behind, I was excited to see my parents. It was May 1st and I wasn’t flying home to the states, but actually to southern Spain to meet my parents for a little mini vacation, entailing a resort for a week followed by a baltic 9-day cruise before finally reaching home in Florida. 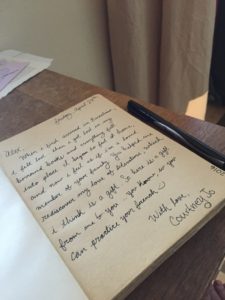 My parting gift to Alex, my host brother and best friend.

That leaves me with the question, am I a changed person? 100%. I think flying off to a random city across the world does wonders for the soul. I really challenged myself in taking the time to slow down and seek out small adventures and do something that I normally wouldn’t do back home in America. I did my best to travel locally by myself and I picked up new hobbies along the way. I forgot how much I love literature until this semester when Alex allowed me to borrow some of his John Grisham novels. I am forever grateful he trusted me with his books and this allowed me to not only connect with him, but tap in to that part of me that is okay with being me. I would take my book to read in the Gotic neighborhood or in a cafe near Passage de Gracia alone, fearless of whatever others may think. Back home, we think it is odd when one eats alone or goes to the beach alone or shops alone, etc. I think my alone time is really what allowed me to grow as a person and set aside those thoughts of what others thought of me. In addition to being alone and becoming comfortable with myself, I was able to meet so many new strangers and talk to those around me whom I would have never before. Speaking of those I would have never met, my third grade students and my adults with intellectual disabilities would never have been in my life if I chose another path in Barcelona. But my path was one that was self building and self exploring. I found that I love to teach… who knew? I never wanted to become a teacher before but now I am thinking about flying to Scotland after graduation to receive my TEFL certificate and continue teaching in Spain for a few years. Amazing the things you learn about yourself when you take a step out of your comfort zone and allow yourself the time to find out.

Reverse Culture Shock. I was very curious about this phenomenon. Turns out, I am great with switching between realities. I think I switched into my American version the second I stepped foot onto the plane. Landing in an American airport was so… normal. So familiar. The airport was busy with people passing in every which direction. This, I feel, happens in ever culture around the world, giving me comfort. We are all just people. One species, one race, one type, one beating heart…all just going about our day regardless of location or language. I will say, though, that hearing English in the airport was quite annoying. In Europe, I could block out the loud speaker talking from the ceiling because I don’t understand any other languages, so it’s background noise for me – such as a fan when you fall asleep. However, since I do know English, the loud speaker lady was quite annoying and I found myself distracted while listening to her. Funny how I went through 4 months of traveling ignoring so much communication. Anyways, I felt as if I never missed a beat, as if I never even studied abroad in a different country the past four months. Reverse culture shock was something I didn’t have to struggle with. In fact, after all the traveling around with my parents in May, I was really excited to get home for the soul reason of not having to lug a suitcase around with me anymore!!! I just drove home and began my summer routine, just like normal.

It is nice to have a permanent home again. I only hope later on in life that I have a permanent home in Spain 🙂 I am a completely changed person, self-loving and more adventurous than when I started. I am very thankful to my parents, The University of Alabama, and CEA for giving me this whimsical semester in Barcelona.