The Elmina Castle And Slavery River
With the sea wave fluttering the beach, everyone got up. Today is the first day we live in the Anomabo Beach Restore, which is the best place we lived so far. We listen the sound of the Atlantic Ocean everyday. After the breakfast, our driver, James, picked us up to Elmina, a historical town located near the Atlantic Ocean. After briefly seeing the beautiful scenes around the castle, we stepped into the main gate of Elmina Castle. Under the lead of the tour guide, we visited the whole area of the Elmina Castle, of which the largest female dungeon is the most remarkable thing that I cannot forget. The women slaves were held in the dungeons, mainly depending on how ships took them away. Fortunately, not like most of the dungeons in the Elmina Castle, this people who controlled this dungeon provided food and water for women slaves to survive in the dungeons. Also, conditions on the ship are terrible. The limited air led to outbreaks of fever and flu among the captives. According to some evidences and records stated, a Danish ship Laarburg Gallei left Guinea after capturing slaves from the Elmina Castle. Originally there were 443 Africans, by the time they arrived in the America continent 90 died. Thus, it is relatively easy to get the point that the death rate on the ship was tremendously high.

Around two hours later, we stopped by one famous spot, which is the Slave River. Also, we visited the Last Bath, which is the last place for slave to bath before shipping to America, Western Europe, Caribbean Ocean or South America. Upon seeing the slave river, I began to consider one critical question: when did the racism start to be popular and why does the racism still exist in the America? The best way to stop racism may be that people who are white or black respect each other. If people around the world really began to respect the people from other parts of the world, the world should be no war and racism any more. Around ten minutes later, we came back the van and continued to our trip. Half hour later, we arrived at our destination, the Cape Coast, which is near the east edge of Atlantic Ocean. This is my first time to see east edge of Atlantic Ocean in such close distance. I spent an hour sitting near the ocean, which always let me memorize my hometown that I did not come back for two years. 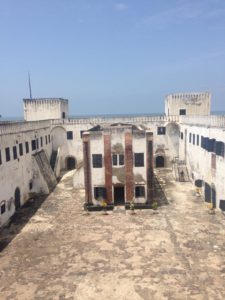 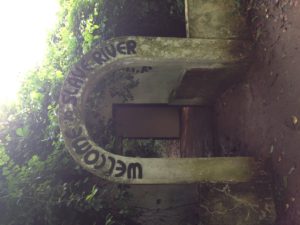 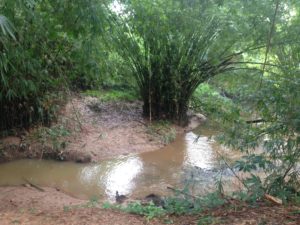