African Traditional Religion
With the sunrise of Kumasi into the room we lived, everyone got up and headed down to eat the breakfast. The flavor of Kumasi’s breakfast is a little bit different from the breakfast in Sunyani. The breakfast here has the sausage, which Sunyani does not have. After eating the breakfast, I read two articles, one of which aimed to explain what the African traditional religion is. According to that article, no one taught children God in Africa. The way to know God is from rituals, the words they speak, and the nature itself. Upon reading this article, I gradually considered one critical issue in the modern world. Why do people around the world fight each other for the belief? And why can not people believe their own religion by their free will just like African? When I kept reading this article, I also found that traditional African religion did not have a typical book, like Bible. As a non religion person, I think it is more flexible for people to choose religion that they are eager to follow, not forced by their family bond or some Catholic schools. Thus, everyone in the world needs to consider such religion seriously.
Having read this article, I began to read another article written by Dr. Seth, called Indigenous Economic Institutions, which stated that the knowledge pursed by indigenous African people is extremely accurate discovered by most of Western scientists. Also, the indigenous people express their belief and respects through the most simple way ,like dance, rituals, and so on. This paper reminded me of what I thought before, which is that the simplest way is always the best solution for most of the puzzles we cannot solve. Also, it is necessary for us to analyze the deep meanings behind what the indigenous people do. The most important meaning may be that they hope to bring fortunates from the God through these methods and rituals. Also, it is the best way for them to respect the God and nature for which they can sacrifice themselves. If we deeply think about the critical environment issues existing in the modern world, we will find that almost every harmful consequence is due to the greedy desire of natural resources and their own profits. What will the world be if people can respect the nature and give their profits up like indigenous African? Without no doubt, the world will be more peaceful than now.
At around 12 pm, we were all ready to go the rural area where we would see the rituals of indigenous African. During the way to the rural area, I found some people burn the forest by the street, which reminds me of the critical environment issues here once again. The Ghanaian government should issue some laws or files to protect the natural resources if it will become the desserts soon. Around one hour later, we arrived at the village that would have traditional religion rituals. At first, we shake hands with the family of chief to express our friendly meanings. Also, they responded us kindly and played their traditional dances to us. In the next three hours, we watched them dance and play the drum. Although I had watched such dance in the tv or read related stories in the textbook before, it was still my first time to see the real scene in the world. During the rituals, we went to the stage and danced with them. They poured the white lime powder to us. Originally, I confused about why they poured the white powder until we talked with chief after the rituals. Anyway, this was my first time to dance. I tried my best to follow the beat and soon I gained the basic ability of how to dance.
One hour later, we talked with the chief about why they hold this ritual and what the deep meaning behind it. From his answer, I gradually understood why they held it. The major reason is that they expressed their respects to the God, and also they hope that God could give them power, thus this was why they poured the white powder to us. Upon hearing his answer, I began to understand how important the nature is in the mind of the indigenous African. Also, they are really friendly that they are eager to bring fortunates to us through lim powder. After talking with the chief, we waited for Dr. Seth’s negotiations with the chief. During this period, we met with several children playing in the village. Children are the hope of one country, especially in the developing countries. It is the time for Ghanaian government to adjust the education policy that more children could have education. 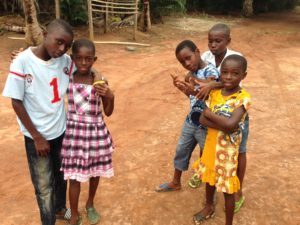 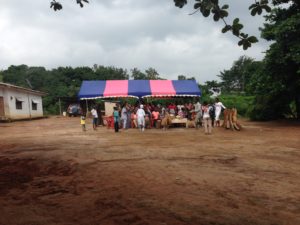