I woke up this past Wednesday morning in my own bed in Houston, Texas, vaguely aware of some bizarre dream I had where I had spent an entire 6 weeks in Europe traveling and taking a class. Then, after about 10 seconds it hit me that it wasn’t a dream, that I had actually traveled around Europe and achieved a goal I’ve had since I was 5 years old.

Coming home after an experience like the one I had is peculiar. I didn’t really feel “changed” as some people do, or even awestruck that I had been blessed enough to travel in a foreign country. I just wanted to go back. Back to the 50 degree Fahrenheit weather that I had grown to love, the walking EVERYWHERE, and the slow, calm pace of living that had become a second nature to me. Living in Copenhagen for the summer spoiled me and I’m not quite sure I’ll be able to go back to functioning in the way I did in the United States before leaving. However, this is not necessarily a bad thing, because the lessons I picked up this summer can be applied to a way of life here. And that’s how I’ll bring a little bit of Europe back into my life here while waiting for the time I can go back.

Lesson 1: Talk to everyone, everywhere. You never know when you’ll see them again 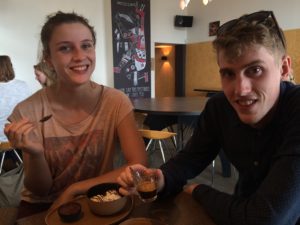 Meet Lise and Michel. In the summer of 2015, these two lovely Belgians walked into my life at a Eastman Chemical plant in Florida and this summer, I walked into their lives in Belgium. I stayed with them for a few days and they gave me tours of the cities they loved, their university and even took me to their graduation from the Chemical Engineering school. I never would have been able to experience their country in the same way as I did if they hadn’t been there and I’m forever grateful for their hospitality and role they played and will continue to play in future adventures.

Lesson 2: Budget, but don’t limit yourself. 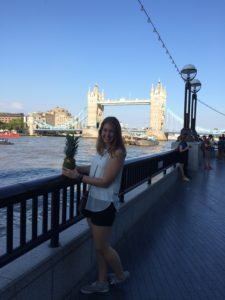 If there’s one thing that you should know about me, it’s that I hate spending money. I’d rather save it up for something that I can splurge on later, knowing full well that I won’t actually splurge. But it’s nice to think I would anyway. Going to Europe didn’t make me change this mentality too much but it did show me that this is my time to do what I want and if there’s something that I think is worth it, I should go for it. You see this pineapple? It contains a delicious drink but cost a whopping 7 and a half pounds (about $10.00). My brain under normal circumstances would’ve skipped the opportunity and drank tap water but I decided to go for it. And now, if nothing else, I have a super cool picture of me drinking this drink out of a pineapple in front of Tower Bridge in London. The thing I’ve learned is that money will always be there in some way shape or form, and you will be able to earn it back. The time I had here with friends I won’t. So choose the things you want to spend money on wisely, (you do need a way to get back home after all), but don’t be afraid to do the things you want to do.

Lesson 3: While it is possible to be in two places at once, spreading yourself too thin doesn’t help anyone 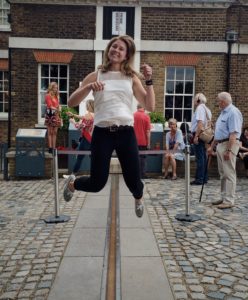 I’ve always been obsessed with the idea of having a twin to help me finish all the work I needed to get done. Splitting myself in two, and being in two places at once also seemed ideal. I accomplished this when I went to Greenwich, London and jumped over the Prime Meridian, essentially splitting myself in half across the Eastern and Western hemispheres. While this was neat, there was a lesson to be learned in regards to the classwork I had to do when I was abroad. I was trying to do everything; get good grades, travel, hang out with friends and all of these were high priority, so much so that I became “mom” while I was with people. Instead of enjoying my time, I was bossy because my stress levels were so high trying to do all of the above. I do that here as well, and if there’s anything I learned, it’s that people don’t need another mom on their trip, they want their friend. So pick a goal every day that you want to accomplish and set out doing that. Don’t worry about the rest and it’ll take care of itself.

These lessons, while not being a replacement for the Europe experience itself, bring me a little closer to regaining the confidence and sense of adventure while I was abroad. Though I’m sad it’s over, and waking up in my own bed makes the entire summer feel like a dream, I’ll be able to carry these moments with me for a lifetime. I wouldn’t change it for the world.